US-Bangla,Vistara to operate flights between Bangladesh and India 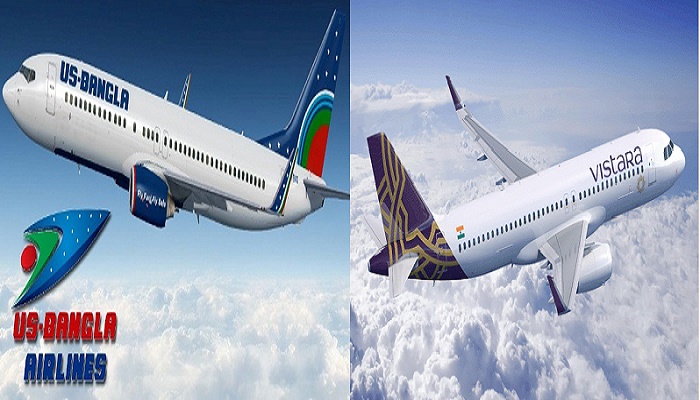 US-Bangla will start operating Dhaka-Kolkata and Dhaka-Chennai up and down flights from Wednesday, several months into hiatus caused by corona pandemic.

Except Monday, plane will leave Dhaka for Kolkata at 9:45am while Dhaka-bound aircraft’s take-off from Kolkata airport is 11am.

US-Bangla plane will leave Dhaka for Chennai at 10:30am on Monday, Wednesday, Friday and Saturday and vice versa at 1:30pm.

The announcement came just a day after SpiceJet had decided to operate flights to Dhaka and Chattogram from India.

Vistara will operate special non-stop flights between Delhi and Dhaka from November 5, the airline said in a press release.

The services will be operated on Thursdays and Sundays between the two cities, using the airline's Airbus A320 Neo aircraft.

There is significant demand for air travel between India and Bangladesh, and the resumption of flights brings relief to the traders, business communities and other regular travelers, he said.

Bookings are taking place in all channels, including Vistara's website, mobile app and through travel agents.

SpiceJet said it will operate non-stop flights four times a week between Kolkata and Chittagong, besides connecting Delhi, Kolkata and Chennai with Dhaka.