J-K: Those youth who want to shun the path of militancy are welcome, says Lt Gen BS Raju 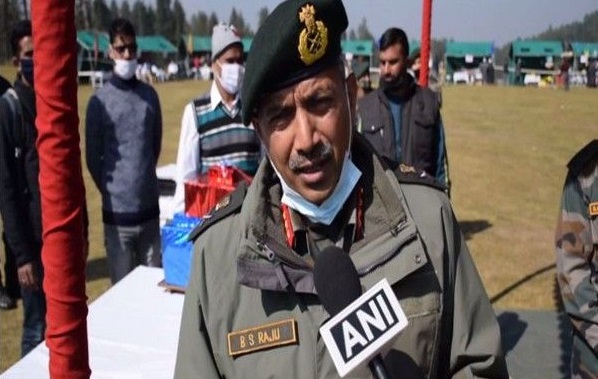 "I want to make it clear that those youth who want to shun the path of militancy are welcome. We encourage the youth to leave militancy," said Raju while addressing the festival.

"I appeal to youth who are ready to shun militancy to return to their homes as the environment is favourable for them for starting a peaceful and dignified life. Otherwise, people fighting the army with the weapon in their hands will be dealt hardheartedly," he added.

He later informed ANI that the Indian army had been running a drive to motivate the misled youth of Jammu and Kashmir to surrender in the past few months, and many have come forward and surrendered.

"We had been running a drive to encourage the people on the path of crime to surrender from the past few months. I'm happy to say that in the past few months, three people openly surrendered and few others surrendered in secrecy. And I'm hoping this process will go on and motivate other youth as well. The drive is giving a message that crime is not a one-way street, and they have a chance to return," he added.

Talking about the situation on Line of Control (LOC), the Lieutenant General said that despite Pakistan's attempts at infiltration, the Indian Army had been able to control it.

"250-300 terrorists may infiltrate into the Indian side before the winter season. The situation on the Line of Control is under control. Our border surveillance grid is strong," he said.

He also talked about the Yusmarg festival and said Army is trying to organize more such festivals in other tourist spots in the Valley as they create a peaceful and joyous environment.

"Yusmarg is a beautiful area, and that is why we try to organize an annual festival here. Army has created a very beautiful environment here. I want the Army to organise such festivals in other tourist places as well to create such a joyous atmosphere," Raju added.

The locals of Jammu and Kashmir thanked the Army for organising the festivals and said such events help in promoting local talent.

"With this festival, the Army gave us an opportunity to showcase our talents like martial arts. We are thankful to the army for the opportunity. People are coming here in large numbers to enjoy," said a local Bilal Ahmed who is a martial artist.

Army also provided electric wheelchairs to specially-abled people, and locals expressed their gratitude to the Army for the gesture.

Umar Ahmed who received an electric wheelchair said that now he would be self-dependent as he would no longer need the help of an attendant for movement. (ANI)