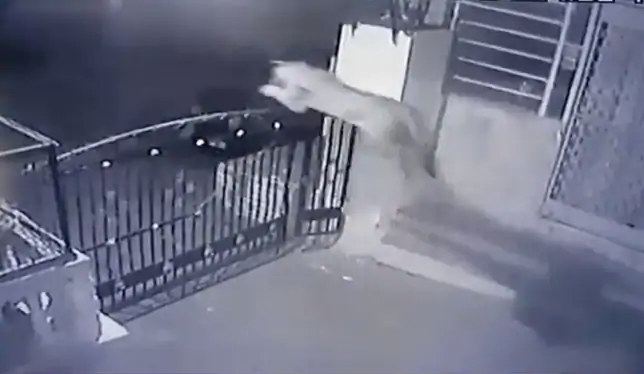 A viral video shows the moment a leopard effortlessly leaped over a tall gate while chasing its prey. The video emerged on social media a few days ago and the big cat's stunning jump over the gate has since captured the attention of thousands of people.
The video was shared on Twitter by Nikit Surve, a Mumbai-based wildlife biologist researching human-leopard interactions. Mr Surve said he received the clip over WhatsApp and hailed it as a testament to the agility and skill of leopards.

It was also posted on the microblogging platform by Indian Forest Service officer Susanta Nanda, who wrote: "A leopard is known to leap over 20 feet and can jump up to 10 feet into the air. Such a powerful big cat."

In the black and white CCTV footage, a small animal can be seen running between the metal bars of the gate at top speed. It is not clear what animal the clip features - some viewers say it was a cat while others are convinced it was a dog. A leopard then appears following close at its heels and jumps over the gate in its pursuit of its prey before the video ends.

It is not clear where the incident took place, although some people in the comments section said it happened in Mount Abu, Rajasthan.

Struggle for existence. Leopard on its heels, chasing one of its favourite prey.

A leopard is known to leap over 20 feet and can jump up to 10 feet into the air. Such a powerful big cat.. pic.twitter.com/tZ3rjVJTmP