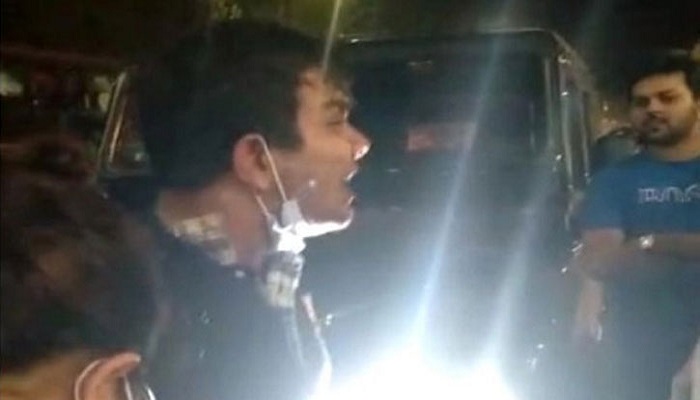 Lawmaker Haji Salim’s son and staffs have allegedly beaten Navy officer and assaulted his wife at Kalabagan intersection of Dhanmondi.

The victim introducing himself as SSF officer Lt Wasim claimed that he along with wife was going to his destination by a motorcycle Sunday evening. They bought some books. As a jeep hit the motorbike, he wanted to talk to the inmates of the vehicle. He disclosed his identity being an officer of Bangladesh Navy.

Some people came out the Haji Salim’s car and started beating the Lt Wasim injuring him.  Other people and commuters rushed to the spot and captured video of whole incident by mobile phone.

It is alleged that the attackers were trying to flee the spot seeing large crowd but in vain.

The video going viral on social media shows that the victim is introducing himself to be armed forces’ officer Lt Wasim. “The car hit my motorcycle. I wanted to talk to the car inmates. I disclosed my identity. But they started to beat me. My wife was not spared. I don’t know the reason for attack.”

It is learnt that Haji Salim’s son and staffs were inside the car bearing registration number Metro Gha 11-5736. A sticker used by lawmaker was also stipulated on the glass of the car.

Sub-Inspector Nazmul said the both sides were in the police station and jeep driver Mizanur Rahman was arrested.

No details were available till filing of this news.