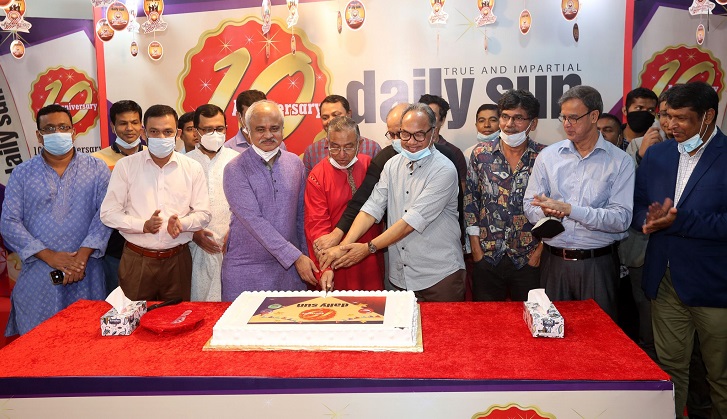 The Daily Sun, a national English newspaper and a media outlet of the East West Media Group Limited, stepped into the 11th year of its publication on Saturday.

Daily Sun Editor Enamul Hoque Chowdhury cut a cake with Bangladesh Pratidin Editor Naem Nizam and Kaler Kantho Editor Imdadul Haq Milan at the office of the daily at the Bashundhara Residential Area in the capital marking its 10th anniversary in the morning.

Journalists and officials of East West Media Group Limited were present on the occassion.

Highlighting importance of print media, Bangladesh Pratidin Editor Naem Nizam said that there is no alternative to printed newspapers as it has different specialty to the readers. A print newspaper can be preserved intact for long.

Many newspapers in developed countries, including the USA, are backtracking to their print versions after switching to online only, he added.

In a message, Bashundhara Group Chairman Ahmed Akbar Sobhan said the Daily Sun has made a place in this competitive market with many exclusive news reports, editorials and commentaries which throw light on important issues of the country.

In the tenth anniversary supplement, the Daily Sun focused on philosophy of Father of the Nation Bangabandhu Sheikh Mujibur Rahman on a wide range of issues, including politics, economy, governance, foreign policy, education and culture, which is immensely valuable and needs to be visited and revisited.

The news gathering operations of the Daily Sun got a momentum as seasoned journalist Enamul Hoque Chowdhury took charge of Editor’s Office of the newspaper.

Meanwhile, there are many feathers added to the crown of the newspapers as achieved title of ‘second most circulated English newspaper’ in the country according to official data.

Daily Sun Editor Enamul Hoque Chowdhury said the success story of the newspaper strengthens our commitment and inspires us to reiterate our pledge for the kind of journalism that we pursued over the years.

“The Daily Sun is now dominating stand as second player and it will clinch top position in future,” he added.