Conspiracy still on to create unrest 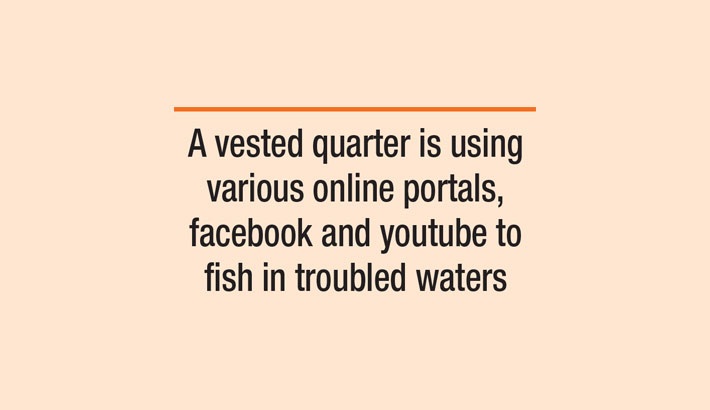 A vested quarter is still active in hatching a conspiracy against the government, cashing in on different issues, including rumour about child lifting, corruption in heath sector and protests against rape incidents.

Detective sources said after failing to achieve political gains during the present government, a vested quarter along with opposition parties has been trying to create unrest by letting loose their people on the political field.

As part of their evil design, massive demonstrations against the recent rape incidents have been staged on the streets, demanding that the government amend law to ensure capital punishment for rapists.

But, a vested interest group has allegedly intruded into the protest rallies and demanded the resignation of the government.

Even, abusive words were written on banners and posters after the name of Prime Minister Sheikh Hasina to tarnish the image of her government which is working hard to turn Bangladesh into a middle-income country.

The banners and the posters read ‘Dharshaner bichar pore, agi Hasinar padathyag chai’ (before the trial of rapists, we first want resignation of Sheikh Hasina) and Chhi…Chhi… Hasina…..Lojjay bachina (it is shame…it is a shame on Hasina), which have gone viral on social sites.

Many persons have already raised questions over such ill motive that the protesters do not want trial of rapists, but demand the resignation of the Sheikh Hasina-led government.

Protests against the recent incidents of rape and other forms of violence against women continued in the capital and other parts of the country.

It is disappointing to note that vested quarters are allegedly trying to malign the government by triggering protests against the reported gang rape attempt of a housewife in Begumganj of Noakhali.

Several incidents of violence against women have been reported recently, but it is good to note that the government is taking harsh steps to ensure exemplary punishment for the perpetrators.

Law enforcement agencies have arrested almost all the accused in the recent incidents of violence against women.

Nevertheless, a section of anti-government politicians are trying to create anarchy and defame the government by instigating protests over the recent rape incidents.

Last week, in such a situation, the Home Ministry in a statement urged people to abstain from publishing ‘fake, confusing and provocative’ posts about the government and law enforcers on social media.

Recently, fake, confusing and provocative posts about the government, public representatives, the police, the army and other law enforcers have been published on social media facebook, the statement said. Publishing such false and confusing news might disrupt a peaceful environment and trigger chaos and confusion among people, it stated.

Observing the circumstances, the government has decided to take action against troublemakers to maintain law and order and stability of the country, it said. The ministry also requested all to abstain from giving such the posts on social media and said, “Otherwise legal action will be taken”.

Last week, police headquarters also said that the government and state were making efforts to ensure justice for all rape victims, but a vested group is aiming to manipulate the movements. It came up with the observation amid the countrywide protests against rapes, repressions, and sexual assaults on women. Many common people, civil society groups, and political parties have blamed the police inaction for the alarming rape situation. The protestors also demanded immediate resignation of Home Minister Asaduzzaman Khan.

The police authorities said they were acting professionally and sincerely to prevent rape incidents and prosecute the accused as widespread resentments are seen among youths and social media sphere amid some rape incidents.

They also requested all to shun anti-state activities in the name of anti-rape movements.