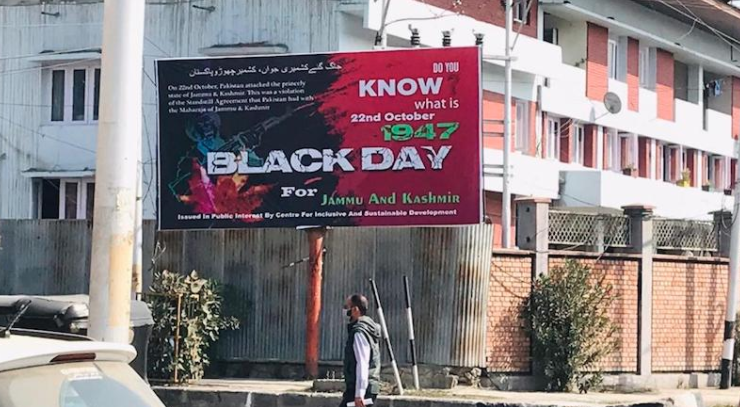 Srinagar: Jammu and Kashmir witnessed yet another episode of history making as locals for the first time put up hoardings in different areas of summer capital Srinagar to commemorate the ‘Black Day’ (Oct 22, 1947) of the region, marked by the brutal invasion by Pakistan over seven decades ago and the mindless atrocities committed on the people.

The Article had given special status to the former state which was turned into a union territory by New Delhi following its bifurcation.

Meanwhile, Junaid Qureshi, a prominent Kashmiri and director of Amsterdam-based European Foundation of South Asian Studies, tweeted:  "22 October 1947. The Blackest day in the history of Jammu & Kashmir. When the Islamic Republic of Pakistan violated the sovereignty of J&K, breached the signed Standstill Agreement with J&K, invaded J&K, killed, raped and looted us in an attempt to illegaly annex our homeland."
The Narendra Modi government is observing Oct 22 as ‘Black Day’ to highlight Pakistan’s brutal invasion of Jammu and Kashmir in 1947.

The government has planned several events in the national capital as well as Jammu and Kashmir, besides virtual events to mark the day, media reports said.