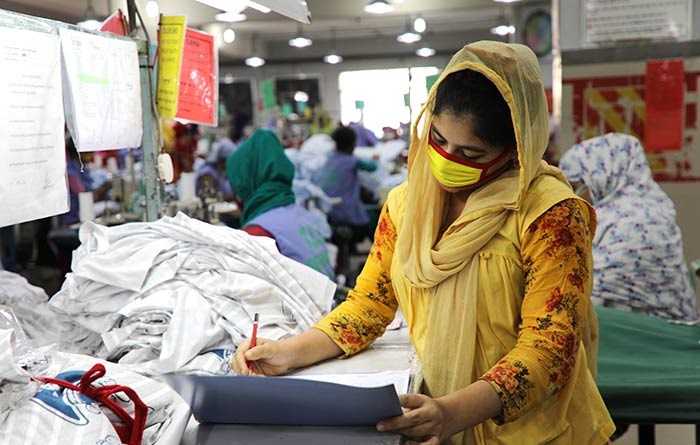 Nearly one-third of garment workers suffered loss of earnings since the lockdown in late March this year due to the coronavirus pandemic, according to a study.

Income loss forced the workers to decrease spending on food and education. Again, more than half of them fell into debt trap to meet family needs, it revealed.

The findings of the study styled 'Covid-19 and Women Empowerment: A Rapid Analysis of the Bangladesh Ready-made Garment Sector' were disseminated during a webinar hosted by Awaj Foundation on Monday.

In his presentation, Mr Roy said about 32 per cent of the respondents reported income loss by 53 per cent between March and June than the same period last year.

This was due to a lower number of orders from global buyers, causing a drastic cut in overtime which is the main source of earnings for workers after basic pay.

For loss of earnings, Mr Roy said, only 10 per cent of these workers received support from either government or trade unions or local philanthropists.

The study analysed data collected from the workers of four export-oriented garment factories located in Gazipur and Ashulia.

It found that an estimated 27 per cent of the workers had to cut spending on food while many workers sent their families to rural households.

Fifty-two per cent of the respondents slipped into debt trap as they had to take loans ranging from Tk 12,000 to Tk 40,000 to meet their daily expenses.

Besides, 98 per cent of the workers had to spend more on health safety issues to avoid contracting coronavirus and entering factory premises.

The CBSG chief said many factories withdrew food and transportation as part of shrinking cost of business that resulted in the extra burden of cost on workers.

The webinar was told that the factories having labour unions got more facility like job security, health safety measures and Covid-19 testing in the first few months of the pandemic.