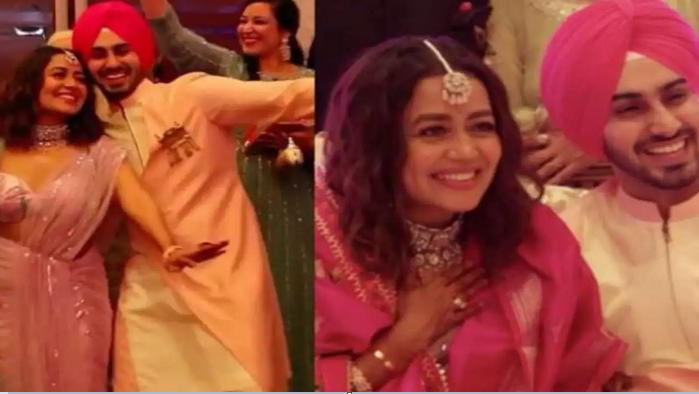 Ahead of the launch her new song, Nehu Da Vyaah, Neha Kakkar has shared a video from her roka ceremony with fiance Rohanpreet Singh. The video comes amid speculations whether Neha is indeed tying the knot or simply using it as a publicity gimmick for her song.

The video shows Neha and Rohanpreet dressed in traditional outfits, walking into the function hand-in-hand. Their friends and family is seen dancing with them to the beats of dhols and nagadas. “#NehuDaVyah Video releases Tomorrow. till then here’s a small Gift for My NeHearts and #NehuPreet Lovers. I Love @rohanpreetsingh and Family Thank you Mrs Kakkar and Mr. Kakkar Hehe.. I mean Mom Dad Thank youu for throwing the best event,” she wrote with the video.

Considering her past record, Neha’s fans are still sceptical whether she is indeed tying the knot with Rohanpreet. Previously, she and Indian Idol host had pretended to be getting married for almost a month but later revealed that it was all a publicity stunt for their new song with her brother Tony Kakkar.

But Neha and Rohanpreet have been leaving no opportunity to get mushy on social media. On her latest video on Instagram, Rohanpreet commented, “@nehakakkar Babuuuuuuuuuuu i love youuuuuuuuu soooooo much Best day Best Momments shukar aa mere rabb da.”

On Monday, Neha had shared a video from her first meeting with his parents. “The day he made me meet His Parents and Family Love You @rohanpreetsingh #NehuPreet,” she wrote.

Neha and Rohanpreet will reportedly have a registered marriage on October 22, two days before their wedding ceremony in Delhi on October 24. An invitation card of their wedding reception was recently leaked online. As per the invite, the reception will be held on October 26 at The Amaltas, in Mohali, Punjab.