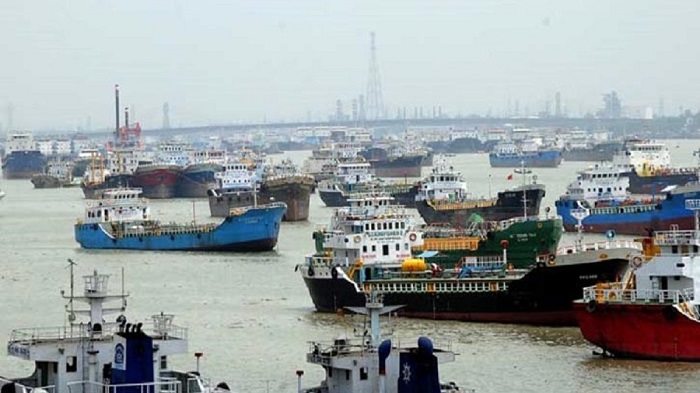 Water transport workers enforced an indefinite strike across the country on Tuesday to press home their 11-point demand, disrupting the operation of lighterage vessels and oil tankers at Chattogram Port.

He said the strike was called on October 13 from a human chain in front of Labour Department at Bijoynagar in the capital.

The unloading of goods from vessels anchored at the outer anchorage of Chattogram Port has been suspended.

Besides, the supply of goods through river routes from Chattogram to other parts of the country remained halted. Importers and traders said they will suffer huge losses due to the strike.

In response to the strike, workers and activists of the eight organisations under the Federation refrained from joining their work since midnight.

Hundreds of lighterage vessels and oil tankers remained stranded in 16 jetties of the port, the largest in Bangladesh.

Nabi Alam said, "When we started the movement in November last, we were assured by the government and the owners that our demands would be met."

“But they broke their promise. So, we’ve no option but to go on strike. We won’t call off the strike until a final decision is taken to fulfill our demands."

The river vessels that left for various destinations in the afternoon will be anchored after reaching their destinations, said the vice-president.

Earlier, the Shipping Workers Federation announced an indefinite work across the country in November.

The demands are stopping  extortion and robbery in all vessels, including bulkhead, payment of salaries of the water transport workers as per the gazette announced in 2016,issuance of landing pass and food allowance by the owner to India-bound vessel workers, determination of sea and night allowances for all vessel workers, compensation of Tk 10 lakh for workers killed in workplace accidents, issuance of appointment letter, identity card and service book by the owners, to protect the navigability of the rivers and to install necessary markers, buoys and lamps, master/driver test, distribution and renewal of certificates, stopping illegal navigation, stopping all kinds of irregularities and harassment of workers in the Department of Shipping and ensuring social security of ship workers.

According to sources at the Shipping Workers Federation, they have been struggling since 2015 to implement various demands.

Although some of these demands were met, the federation leaders submitted an application to the Department of Labour in 2018, demanding implementation of 11 unresolved points.

The copies of the application were submitted to the Ministry of Shipping, Ministry of Labor and Employment, various organisations of river vessel owners and all the departments concerned.

Despite repeated requests, the Department of Labour and Employment has not taken any effective step to address the problems, said the Federation leaders.