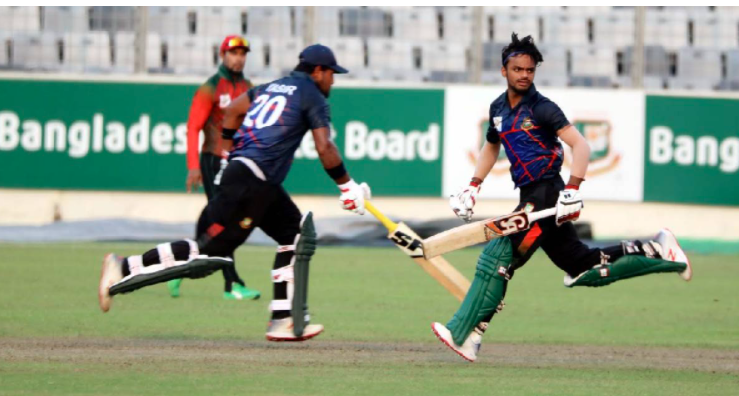 Half-centuries by Yasir Ali and Mahidul Islam helped Tamim XI post 221 for eight in 50 overs in the BCB President’s Cup on Monday at the Sher-e-Bangla National Cricket Stadium.

Tamim Iqbal, the captain of Tamim XI, won the toss and opted to bat first. But they failed to ensure a good start losing four wickets in 17 runs.

In the fiery first spell, Rubel Hossain bagged three of his four wickets in the game.

Tanzid Hasan Tamim was the first to fall when he tried to cut a delivery by Rubel, but only managed to send the ball to the slip cordon where Naim Sheikh took a brilliant catch.

After the removal of both the openers, Rubel sent back Anamul Haque Bijoy (1) and Mohammad Mithun (2) to the dressing room.

Yasir Ali Rabbi and Mahidul Islam Ankon added 111 runs in the fourth wicket stand, hitting a fifty each. Yasir fell while running for a single scoring 62 off 81 balls with five fours and one six, while Mahidul posted 57 off 110 balls with three fours and two sixes.