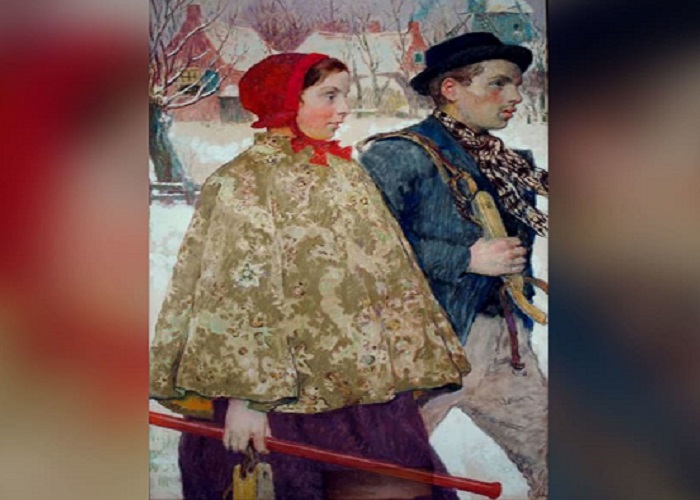 Decades after Nazis looted artwork from a Jewish family fleeing Germany in 1933, a painting was returned to the rightful heirs.

The painting of two young skaters, "Winter" by American impressionist Gari Melchers, was one of the more than 200 pieces of artwork seized by Nazis when the Mosse family fled their home.

The wealthy Berlin family spoke out against the rise of the Nazis early on in their newspaper, "Berliner Tageblatt." The negative attention earned the Mosses the ire of the Nazis, who publicly criticized the family and later looted their extensive collection of artwork.

After 87 years, "Winter" was returned to the heirs Thursday in a repatriation ceremony at the FBI office in Albany, New York.

Austrian architects will transform Hitler's birthplace into a police station.

"The Mosse family lost nearly everything because they were Jews, but they did not lose hope," Acting U.S. Attorney Antoinette T. Bacon said in a press conference. "While this certainly does not take away the pain that the Mosses endured, I hope it provides the family with some measure of justice."

The Nazi regime stole thousands of pieces of art from Jewish families during the 1930s and 1940s, or forced owners to sell them for a fraction of their value as owners fled the country. A database of looted artifacts includes more than 25,000 objects, but experts say the number of stolen pieces is much higher.

Rudolf Mosse was a prominent publisher from the well-known family. He purchased the painting -- also been known as "Skaters" and "Snow" -- directly from the artist in 1900 at the Great Berlin Art Exhibition.

Mosse died in 1920 and the family's art collection and publications were passed down to his daughter when his wife died in 1924, according to federal court documents.

When the Nazis came to power, the family made their way to the United States. Little did they know, "Winter" did too, Bacon said.

The painting went from the Nazis to a number of people before businessman Bartlett Arkell bought it from a prominent gallery in 1934. There was no evidence of Arkell knowing the painting had been stolen, Bacon said.

Since 1934, the painting has been in the Arkell Museum in Canajoharie, New York.
Painting stolen by the Nazis before WWII recovered from a New York museum.

When the museum learned the painting was taken illegally, it surrendered the art to the FBI in 2019.
The painting is now with the Mosse Foundation, which represents the remaining heirs of the Felicia Lachmann-Mosse, Rudolf's only daughter.

Since 2011, the Mosse Art Restitution Project has been working to reclaim more than 1,000 pieces of artwork stolen by the Nazis, president Roger Strauch said at the press conference.

"It was one of the first large expropriations undertaken by the Nazis, a template for what became, unfortunately, a well-oiled machine," Strauch, the step-great-grandson of Rudolf Mosse, said Thursday.

"Winter" has an estimated value in the hundreds of thousands, but the figure will be determined in auction, Strauch said. The painting is expected to be auctioned off by Sotheby's.

So far, Strauch said there have been three dozen successful restitutions of over 50 Mosse pieces. But there's more work to be done, he added.

There are eight ongoing restitutions in Poland, Sweden, Germany, Israel and US, he said.

"While it's believed there were hundreds of thousands of pieces of art stolen by the Nazis, our office is extremely proud to help right even just one wrong done during this evil period of world history," Assistant FBI Special Agent in Charge Peter Magnetto said at the press conference.

"We may have played a small role in a massive effort, but we will forever recognize the magnitude of this work and we're truly honored to be able to return this painting to its rightful owners," he said.