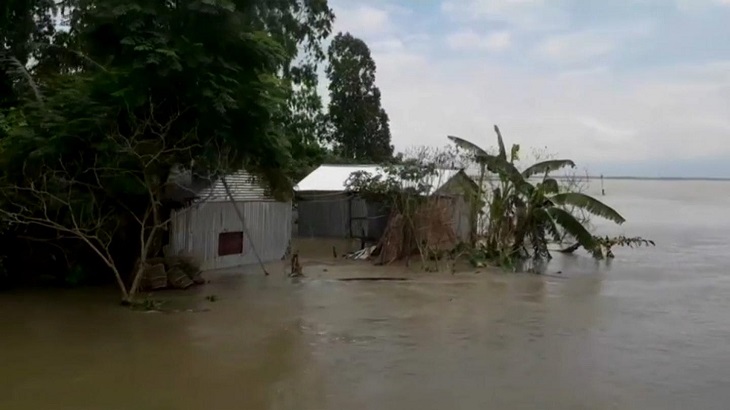 The ongoing fourth phase of the flood has inundated around 1.44 lakh hectors of cropland, affecting farmers on top of the negative impact coronavirus pandemic.

The prolonged floods may affect the production of Aman rice, winter vegetables and some other crops in 24 districts this year, said sources at the Department of Agriculture Extension (DAE).

After the damage to crops caused by the first three phases of the flood, the fourth phase of the flood is affecting the recovery process.

Aman is the second most important staple food of the country and its accounts for more than 38 per cent of the country’s total rice production.

Dr. Md. Abdul Muyeed, Director General of Department of Agricultural Extension (DAE), said more than 1 lakh hectors of Aman paddy have been inundated by the floods while 50 per cent of the paddy fields may have been totally damaged.

“Many vegetables fields have also been affected by the fourth phase of the flood,” he said.

“We are providing all kinds of support to farmers for minimizing the crop losses,” said the DAE DG, adding that farmers can cultivate alternative crops in the aman fields which have been damaged by the flood.

The fourth phases of flood-hit in late September when thousands of farmers have been cultivating crops.

Then there were thousands of others who just had their land ready for cultivation after having spent money and labour in removing tons of mud and debris the previous flood had brought to their land.

The DG of DAE said they are yet to finalize the assessment of crops losses.

Earlier, the three phases of the flood had damaged crops worth Tk 13.23 billion in 37 affected districts across the country.

More than 1.272151 million farmers were affected by the flood caused by heavy rainfall and onrush of upstream water from India.

In the first phase of flooding, crops on 41,918 hectares of land across 14 districts were damaged from Jun 25 to July 9.

At least 343,957 farmers were left counting heavy losses while crops worth Tk 3.49 billion were destroyed, the agriculture minister earlier said.

Meanwhile, the Ministry of Agriculture has announced various incentive packages to help the flood-affected farmers get back on their feet.

The government has distributed free vegetable seeds among 239,631 farmers under the Tk 175 million Agriculture Rehabilitation Programme.