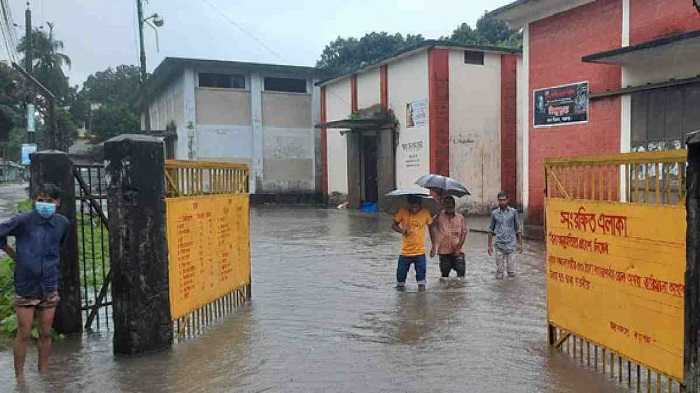 The low-lying areas in different parts of Panchagarh district town were flooded due to the incessant rainfall for the last few days, causing immense sufferings to local people.

Jahangir Alam, acting officer of Tetulia Weather Observation center, said a 217.7 millimeter rainfall has been recorded in the last 24 hours till 3 pm on Wednesday and the rainfall will continue till Saturday.

Experts blamed poor drainage system and illegal constructions of buildings after filling up canals for the waterlogging as many areas including Islambagh, Kayetpara, Dokropara, Ramerdanga, Rajnagar, Khalpara and Nimnagar in the municipality areas of the district town went under knee-deep water.

Besides, many houses, roads, deputy commissioner's office, judge court, Panchagarh Modern Hospital and different educational institutions in the district town have been inundated, inflicting woes to the dwellers.

Local people said if the rain continues further then many new areas will be flooded.

Besides, 169 rice sacks in Sadar upazila food silo have been soaked by rainwater, forcing the authorities concerned to shift the sacks to other places.