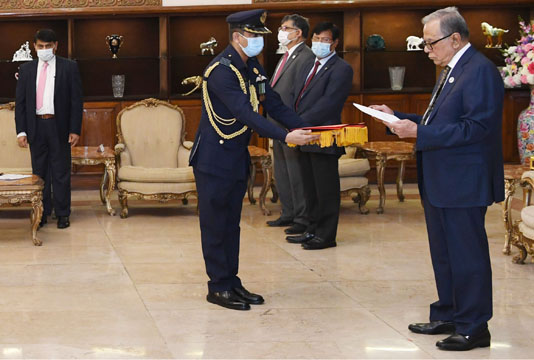 Three ambassadors of Sweden, Spain and Norway to Bangladesh separately presented their credentials to President M Abdul Hamid at Bangabhaban in the capital Wednesday afternoon.

He expressed optimism about ambassadors' sincere efforts to expand bilateral relations further in all spheres during their assignments.

The President also sought their respective country’s cooperation to mount pressure on Myanmar for safe and dignified return of Rohingyas to their homeland.

Abdul Hamid expressed his sorrow and sympathy to the families who lost their near and dear ones during the coronavirus pandemic and the people who were infected with the disease across the globe. “The whole world would be able to save the people from the fatal disease through their joint efforts within the shortest possible time,” he hoped.

He urged the developed countries and multinational corporations to come forward to make the upcoming coronavirus vaccine available to all states, irrespective of rich and poor.

During the meeting with the Spanish ambassador, the head of the state thanked Spanish government for its cooperation in translating the Bangabandhu’s Unfinished Memoirs into Spanish language and hoped that the ties between the two states would be further strengthened in future.

During the meetings, the ambassadors sought the President’s cooperation in discharging their duties in Bangladesh while he assured of providing all necessary supports for doing their assignment.

Secretaries concerned to the President and high officials of the foreign ministry were present.

Earlier, on their arrival at Bangabhaban, a smartly turned-out contingent of the horse-mounted President Guard Regiment (PGR) gave the envoys guards of honour.