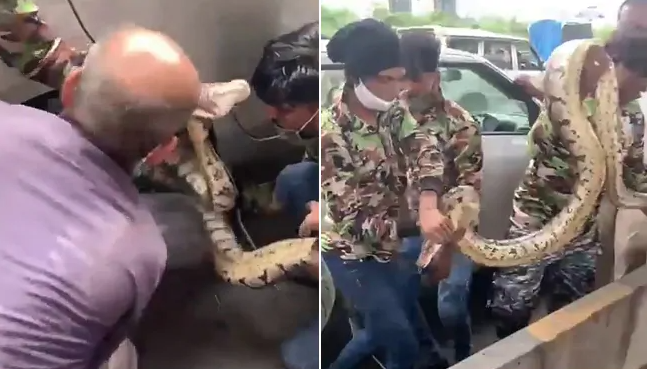 A huge python, caught in the tyre of a car, was rescued in Mumbai on Monday. The python reportedly caused a traffic jam in the Maharashtra capital as it slithered across a busy road before hiding under the car.

A video of the python rescue has now gone viral on social media, leaving many in disbelief over the snake's size and presence in the city.

Indian Forest Service officer Susanta Nanda was among those who shared the clip on Twitter. In the video, snake catchers were seen working together to remove the snake from where it was caught in the tyre.

After removing the car's tyre to free the python, they carried it to the side of the road as curious passersby watched.

"In monsoon snakes can sneak into vehicles. Just be little careful," wrote Mr Nanda while posting the video on the microblogging platform Tuesday.

The rescue video has gone viral with thousands of views across social media platforms.

"Now that's a huge snake," wrote one person in the comments section, while another said, "So shocking".

According to news agency PTI, a police official said that the python caused a traffic jam as it slithered across the Eastern Express Highway on Monday morning.

Car drivers and motorcyclists stopped to look at the nearly 10-feet-long snake's attempt to cross the road, causing a traffic jam on the busy highway, he said.

After crossing the road, the python hid under the car. The snake was handed over to the forest department which later released it in a forest in Thane district.

In monsoon snakes can sneak into vehicles. Just be little careful. pic.twitter.com/C6mzWkZSLH