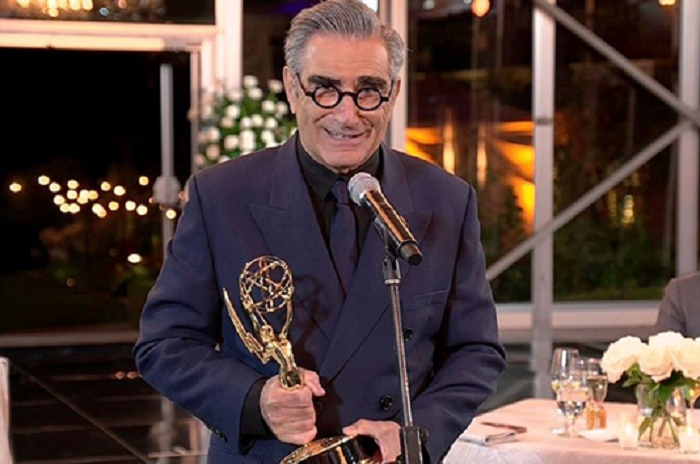 “Hello and welcome to the pand-Emmys,” said Kimmel, as producers cut to archive footage of a star-studded audience, before revealing the venue’s empty seats.

Nominees for the 72nd Emmys — television’s version of the Oscars — are beaming in remotely from their homes via video call, as Los Angeles is still under tough coronavirus-related restrictions.

Dark superhero satire “Watchmen” is expected to dominate the evening, but the early prizes of the night in the comedy categories were swept by Canadian comedy “Schitt’s Creek.”

The first award of the night, best actress in a comedy series, went to Catherine O’Hara for “Schitt’s Creek,” who was handed her statuette by a presenter in a hazmat suit at a socially distanced event for the show’s cast in Toronto.

“I’ll forever be grateful to Eugene and Daniel Levy for giving me the opportunity to play a woman of a certain age, my age, who gets to be fully her ridiculous self,” she said.

Eugene Levy, her on-screen husband, followed that up by scooping the best actor trophy — only to be followed by his real-life son Daniel, for best supporting actor and writing, and another directing prize for the same show.

The show — about a privileged family forced to live in a rundown motel — then took top honors for best comedy series.

“Our show at its core is about the transformational effects of love and acceptance. We need it now more than ever before,” said the younger Levy.

“Schitt’s Creek” failed to earn a single nomination in its first four years, but it gained attention by later airing on Netflix and signed off with a heartwarming final season.

It had faced competition from past winner “The Marvelous Mrs Maisel” — Amazon’s quirky tale of a 1950s housewife who becomes a standup comic.

Nominees — who wore gowns, tuxedos, casual wear and everything in between — were sent cameras to hook up in venues of their choosing.

The coronavirus has turned Tinseltown upside down, bringing productions to a halt even as stay-at-home orders around the world send binge-watching through the roof.

“This has been a miserable year… we’ve been quarantined and locked down, confined to our homes like prisoners,” said Kimmel.

“What did we find in that dark and lonely tunnel? We found a friend who is there for us 24 hours a day — our old pal, television.”

It is tipped to win several more later in Sunday’s ceremony.

“‘Watchmen’ speaks so specifically in so many unprecedented ways to the moment in which we’re living right now,” Libby Hall, IndieWire’s TV awards editor, said of the show which tackles historic US racism, police violence and even mask-wearing.

“I think people will probably get pretty tired of hearing Watchmen’s name getting called… it’s as much of a lock as we have right now.”

The prestigious, show-concluding drama series categories promise to be more closely contested this year than in recent editions — HBO’s Emmys record-breaking “Game of Thrones” has finally mounted a dragon and soared off to Westeros.

“Succession,” a dark portrait of a powerful Murdoch-esque family’s wrangling for control of a dynastic media empire, has amassed 18 nominations.

It is tied for nods with “Ozark,” Jason Bateman’s crime saga set in the American heartland from Netflix, which despite landing a record 160 nominations this year is still desperate to win its first major series Emmy.

Aside from the awards themselves, the night will honor the career achievement of Tyler Perry.

The African-American entertainment mogul has championed greater diversity in Hollywood, and this year paid funeral costs for black victims of police violence including George Floyd.

The theme of tackling racism was expected to feature prominently throughout the night.

“I also want to recognize Issa Rae and the writers on ‘Insecure’ for writing some of the funniest, most heartfelt television of the year,” said Daniel Levy, referring to the pioneering show based on web series “Awkward Black Girl.”

Many stars in famously liberal Hollywood are also likely to have a wary eye on President Donald Trump’s re-election bid.

One early skit in the ceremony featured a Russian-accented postman, referring to the political row over mail-in voting, which Trump has criticized.