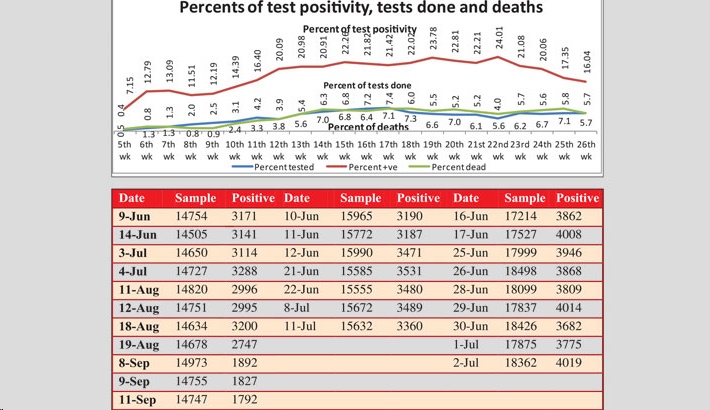 How far is it true that, the more the tests for Covid-19, the more will be the number of cases identified? We argue that the relationship is not linear or not ‘dose-response’ dependent. The number of positive cases logically, should be dependent on the degree of infection in the community and much more in fact, on the pathogen’s infectiousness.

Association between number of tests and number of (positive) cases

Association between number of tests and number of deaths

The figures and the graph above do not show any firm linear relationship between the per cent of weekly tests done on average and the per cent of weekly deaths on average against total deaths. From 7th to 9th weeks the tests increased while the deaths decreased. In the 12th week, the number of tests fell but not the number of deaths. In the 16th week the number of death fell but not the tests. Tests started falling from the 17th week, but deaths did not plummet, except in the 22nd week. From 23rd to 26th week, tests remained more or less equal but the deaths fell in the 26th week, which could be due to weaker virulence of SARS-CoV-2, since no change in the protective behaviour in people was noticed.

Implication of increasing number of tests

If the number of tests is to be increased at all, why not increase it to three lakhs per day (twice that of India, proportionate to the population of Bangladesh), which will give then a test positivity of 5% or lower (which will mean Covid-19 is under leash, as per WHO’s suggestion). At this rate, 30,000 tests will identify 15,000 Covid-19 cases per day. Now, these 15,000 positive people will need isolation and 10 to 30 times of their contacts- 150,000 to 450,000, will have to be quarantined, as per WHO recommendation, per day. Does the nation have the capacity to manage, finance and monitor them every day, over a period of 14 days for each day’s catch- compounded by days after days of identified new cases?

The formidable question, however, will be - will all these endeavours arrest further spread of infection? It did not in India in four months, although India started its heroic endeavour of testing more than a million people per day since May. Will the people remaining outside the remit of daily reach stop on strutting, and roaming, and spreading the infection? Is it not possible that those who tested negative earlier might get infected later and be spreaders? Will those requested to obey self-quarantine abide by? Will those who are in good health, despite being positive, confine themselves to the remits of the four walls of their homes? They are active, robust, mobile, young and fun loving people! We need to remind ourselves that contact tracing did not work in the past in Bangladesh, because people lied and they lie or they forget to who they came in contact with in so many places they frequented to. Another important point to be considered is the number of people, who despite getting infected will be found negative due to the limitation of the diagnostic processes, which when an antigen based testing is used may run up to 65% (as found in India). These false negative cases will spread the disease gleefully, without any such intention though! These ground realities have to be considered by those who urge for increasing the number of tests.