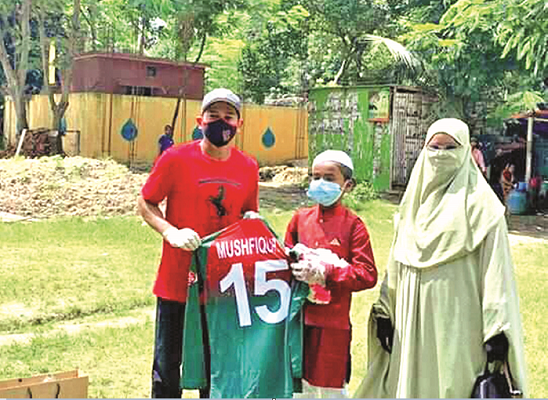 Bangladesh wicketkeeper-batsman Mushfiqur Rahim met his beloved fan Yeamin Sinan and gifted him a jersey with his name imprinted on it along with some cricket kit at Paltan in the capital on Wednesday.

A burqa-clad woman was playing cricket with her madrasha-going son at a local stadium in the capital, whose pictures went viral on social media in the last few days.

It’s learnt that Yeamin Sinan studies at a local madrasa in Arambagh in the capital. He also regularly practices at Nazmul Cricket Academy.

On that day, neither Yeamin’s teammate nor his mentor or coach reached the academy in due time after which her mother Jorna Akhter got down in the field to help her son practice. She was batting to help her son hone his bowling skills. Sometimes she was bowling to assist her son to sharpen his batting skills.

Many praised her mother for her enthusiasm and endeavor towards her beloved son. Some saw it as a crude look.

Mushy not only stood beside the mother-son duo but also went to the field to meet them. Mushfiqur Rahim, who is also known as Mr Dependendable in Bangladesh cricket for his consistent performance which saved the team on many occasions, gifted Yasmin his team jersey along with some cricket kits.

Musfiqur’s photo with the mother-son duo has now been making the rounds on social media.