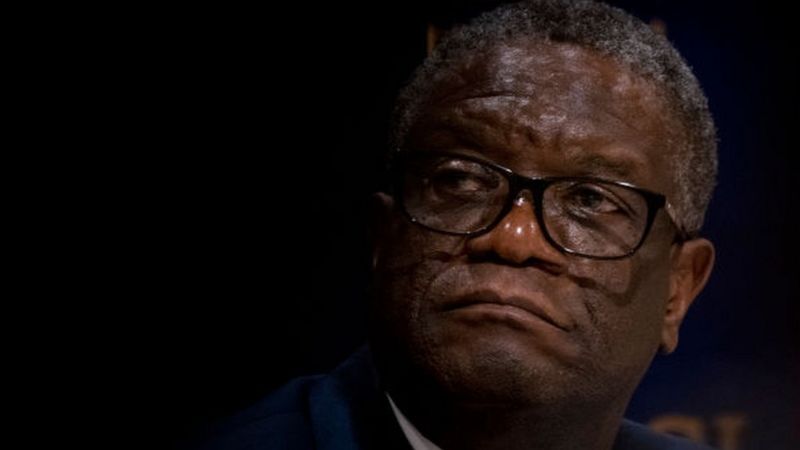 Nobel peace laureate Denis Mukwege has been placed under the guard of United Nations security forces in the Democratic Republic of Congo after death threats against him.

The gynaecologist and his colleagues have treated tens of thousands of rape victims and he went on to share the Nobel Prize in 2018.

Dr Mukwege said he received death threats after condemning a massacre. It prompted hundreds of people to protest, calling for his protection.

Eastern DR Congo, where Dr Mukwege is based, has been wracked by conflict for more than 25 years, fuelled by the area's rich mineral resource.

The UN has a huge peacekeeping mission in the region but numerous armed groups still operate and carry out atrocities such as mass killings and rape.

Dr Mukwege is based near the town of Bukavu at the Panzi hospital, which treats women who have been raped, since he survived an attack at his home in 2012 in which a security guard was killed.

UN police officers had been stationed at the hospital but left in May because of a coronavirus outbreak among the peacekeepers.

'Macabre accounts' of a massacre

In July there were renewed fears for Dr Mukwege's safety after he said he and his relatives had received death threats.
He has been outspoken on a number of issues concerning violence in DR Congo.

One such example was a tweet in which he condemned the July massacre in Kipupu, a village in South Kivu province.

He tweeted: "These are the same that continue to kill in the DRC. The macabre accounts of Kipupu are in the same patterns as the massacres that have plagued the DRC since 1996. As long as impunity reigns and the recommendations of the United Nations mapping report are ignored, the massacres of the Congolese will continue."

He did not specify who he thought was behind the attack on the village on 16 July, but others have attributed it to a coalition of armed groups.
International pressure on the UN to protect Dr Mukwege has built up over the last two months.

On Friday Amnesty International demanded "urgent and concrete measures" to protect him.

Stephane Dujarric, a spokesman for UN chief Antonio Guterres, is quoted by AFP news agency as saying this week that "the personal security of Congolese personalities is a responsibility of the national authorities, but the peacekeeping mission is providing all possible support within its limited means".

Dr Mukwege confirmed on Thursday that the UN guards had been reinstated at his hospital.

He tweeted: "We welcome the redeployment of elements from #MONUSCO to #Panzi this morning to ensure the safety of our patients and staff. Thank you to the #UN for ensuring our protection."