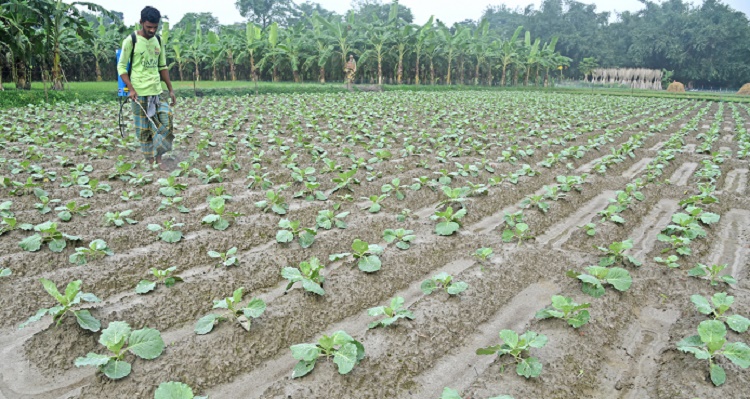 Farmers are interested in cultivating the early varieties of winter vegetables as these are more profitable than other crops.

Winter is the major season for vegetables. Around 70 percent of vegetables are produced in winter such as cole crop, brinjal, cauliflower, cabbage, radish, carrot, turnip, tomato, leafy spinach, red spinach and different types of leafy vegetables.

He said early winter vegetables are cultivated from mid-August to September instead of their usual cultivating time in November but this year farmers started vegetables cultivation from September due to flood and rainfall.

The Ministry of Agriculture has been providing different assistance to produce vegetables at farmland to recover the loss by flood.

The government has allocated Tk10.27 crore to 1, 52,000 farmers for producing different short–term and medium-term vegetables.

It also provides seeds and fertilizers worth about Tk37,36,22,000 free of cost among 1,41,792 farmers in 64 districts under the project -- Vegetable Nutrition Garden Project.

Razia Sultana, a farmer at Ashulia in Savar, said she started to cultivate different kinds of winter vegetables including capsicum, broccoli, red cabbage and leafy vegetables soon after the flood water goes off.

She said though the flood water submerged some of his cropland and damaged crops, she kicked off different kinds of vegetable cultivation to recover the loss.

Visiting vegetable producing area in Savar, it was seen that many farmers were weeding cauliflower, cabbage, reddish, bean fields while some were planting tomatoes and some taking care of seedbeds.

Some farmers were also busy supervising the seedbed in which they are producing saplings of different vegetables.

Some were seen to protect their tender vegetable plants from heavy rainfall by covering them with polythene sheets and spraying additional pesticides to combat paste attack.

With the ever-increasing human population, vegetables have played an important role in the country’s national economy and also in the rural economy.

Vegetables provide maximum output and more income per unit area of land to small farmers, particularly when compared to cereals.