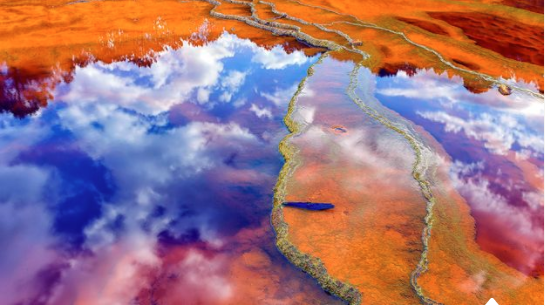 You might not notice anything unusual about Spain’s Río Tinto river if you were to see it rising from the Sierra Morena mountains in Andalusia or emptying into the Gulf of Cadiz.

But over a 50km stretch near the town of Niebla, an hour’s drive west of Seville, this seemingly ordinary waterway transforms into a surreal orangish, rust-red hue that looks like it was ripped from a Martian sci-fi film.

Meaning the “Red River”, Río Tinto’s otherworldly colour isn’t its only claim to fame: many historians also consider it one of the birthplaces of the Copper and Bronze Ages, as the early Iberians, Phoenicians, Greeks and Romans mined the river for copper, gold and silver as early as 3000BC.

Local mining only ended in 2001, and for years, the water’s bizarre colour was believed to be the result of pollution runoff from years of large-scale excavations.

Yet recently scientists have discovered that the source of the river’s Martian-like appearance is due to its uniquely acidic chemical makeup. Jarosite, an iron and potassium sulphate, has long been known to exist in large quantities deep in this section of the river’s subsoil, and in recent years, the mineral was also discovered on Mars.

In addition, the Red Planet and Red River also both contain large quantities of methane gas, leading scientists to conclude that if there was water on Mars, it would probably look a lot like the Río Tinto.

As a result, astrobiologists have begun to treat the Río Tinto as a natural laboratory to test the techniques astronauts might use in identifying Martian life. Digging deep under the river’s acidic base, scientists have found a variety of bacteria and microorganisms, leading experts to confidently state that any forms of life on Mars are likely to be found deep underground.