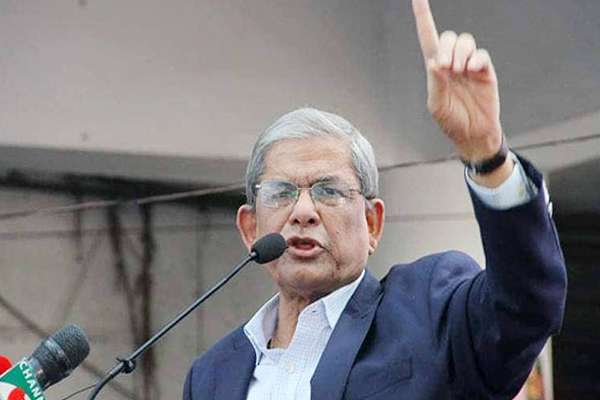 Denouncing the nasty attack on Ghoraghat Upazila Nirbahi Officer (UNO) Wahida Khanam, BNP on Friday said it is an ominous sign for the country.

In a statement, BNP secretary general Mirza Fakhrul Islam Alamgir also questioned how the public life and property are safe in the country when a UNO has to fight for life after getting seriously injured by terrorists.

UNO Wahida Khanam was seriously injured in an attack by miscreants at her home on the Ghoraghat Upazila Parishad premises early Thursday. Her father Omar Ali was also injured in the gruesome attack.

She was airlifted from Rangpur to Dhaka, and admitted to the National Institute of Neurosciences & Hospital, Dhaka.

"The brutal and demonic terrorist attack on a upazila level top government official like Wahida Khanam has exposed once again the current government has turned the country into a failed state. It has no moral ground to run the state,” Fakhrul said.

The BNP leader alleged that the government wants to prolong its power by resorting to terrorism. “The opposition parties and their opinions are being suppressed in a gory way. Now government officials are also being subjected to their (ruling party’s) brutality.”

He said the miscreants are getting encouraged to indulge in crimes with the way the current government has been carrying out extrajudicial killings, including that of retired army officer Major Sinha, ever since it has come to power.

“Ghoraghat Upazila Nirbahi Officer would not have been attacked had the miscreants, no matter who they are, been brought under the law and punished earlier,” Fakhrul observed.

Stating that the law-and-order situation in the country has now deteriorated badly, he said the government vicious agenda is on with the pampering of criminals all over the country to cover up the unfair and nefarious activities like murder, attack, money laundering, human trafficking, looting, tender manipulation and grabbing. “Ghoraghat Upazila Nirbahi Officer Wahida Khanam is the latest victim of such acts.”

The BNP leader said terrorism is now widespread as the government is running the country in the ‘Nazi’ style by ‘abolishing’ the rule of law and ‘burying’ democracy. “Inspired by the ideology of corruption and terrorism, this government is spreading the venomous stem of unrest all over the country.”

“We don’t know any language to condemn the brutal attack on UNO Wahida Khanam and her father. The incident of seriously injuring Wahida Khanam through a vicious attack is undoubtedly an ominous sign for the state,” Fakhrul said.

He demanded the immediate arrest and exemplary punishment of the perpetrators.

The BNP leader conveyed his profound sympathy to the family members and relatives of Wahida Khanam. “I wish Wahida Khanam and her father Omar Ali a speedy recovery."