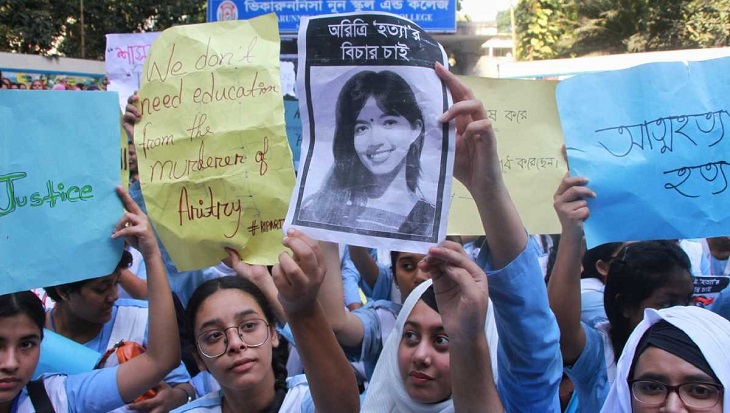 A Dhaka court on Sunday issued arrest warrant for suspended acting principal of Viqarunnisa Noon School and College Naznin Ferdous and another teacher in a case filed over the suicide of a ninth grader.

The victim's mother testified before the court in today’s hearing.

But the teachers were not present in court. The court cancelled their bail as the accused did not take any step, said assistant public prosecutor Mohammad Salauddin Hawlader.

Earlier on November 25, the victim’s father Dilip Adhikari testified before the court.

Aritree Adhikari, a class-IX student of the school, reportedly took her own life at their Shantinagar residence in the city on December 3 after allegedly being rebuked by teachers for using mobile phone during examination.

Following the incident, Dilip Adhikari filed a case against three teachers of the school.

Viquarunnisa Noon School and College guardians protest against the suicide of a student in front of the school campus on Bailey Road on December 4, 2018. UNB file photo

It sparked a wave of outrage inside and outside the school and students demonstrated on the campus for three days demanding.

Police submitted chargesheet in the case on March 20, 2019 and the former trial started on July 10 last year.