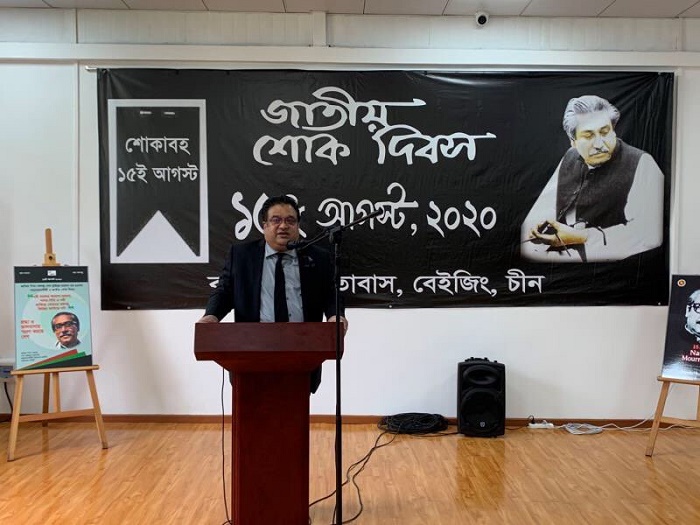 The Embassy of the People’s Republic of Bangladesh at Beijing in China on Saturday observed the National Mourning Day in a befitting manner.

The day marks the 45h anniversary of the assassination of Father of the Nation Bangabandhu Sheikh Mujibur Rahman along with 18 other members of his family on August 15, 1975.

Maintaining local instruction for Covid-19, the programme on National Mourning Day was organised at the conference room of the embassy with the participation of all level officials, employees of the mission, people of Bangalee community living in Beijing and eminent Chinese citizens.

Marking the 45th martyrdom anniversary of Father of the Nation Bangabandhu Sheikh Mujibur Rahman and the Greatest Begali of All Time, the National Mourning Day event began at 10:00am (local time) on Saturday with hoisting of National Flag at half mast.

Later, special prayers, Khatam-e-Quran led by an Imam of China mosque were arranged for the salvation of Bangabandhu Sheikh Mujibur Rahman, his family members and others who were assassinated on August 15, 1975.

All officials-employees of the mission and other attendees observed one-minute silence in remembrance of the martyrs of the August 15.

At the outset of the Mourning Day event, Bangladesh Ambassador to China Mahbub uz Zaman paid tribute to Father of the Nation Sheikh Mujibur Rahman and other martyrs who were assassinated on August 15, 1975.

The event of the National Mourning Day in Beijing was also attended by Deputy Director (Bangla Service) of China Radio International (CRI) Subarna.

A documentary on the life and works of Bangabandhu was also screened at the last stage of the event.