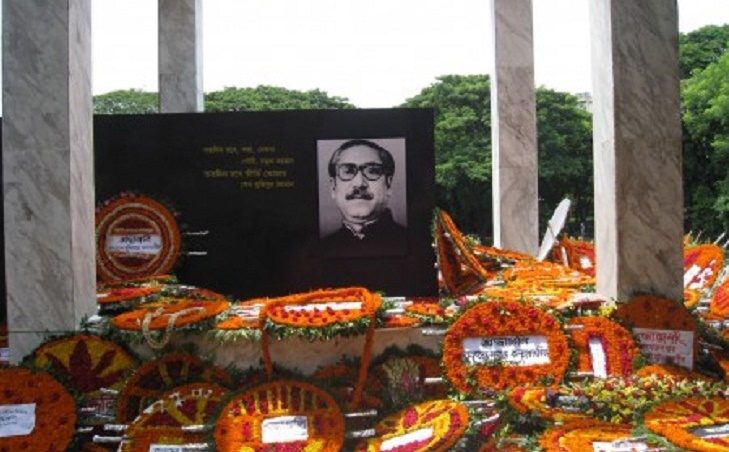 The nation observed National Mourning Day on Saturday by paying rich tributes to Father of the Nation Bangabandhu Sheikh Mujibur Rahman, marking the 45th anniversary of his martyrdom.

People from all walks of life took part in various programmes, including placing of wreaths at the portrait of Bangabandhu, discussions on his life and work and film screening, across the country, maintaining social distancing due to the coronavirus pandemic.

On the fateful night of August 15 in 1975, a cabal of disgruntled army officers assassinated country’s undaunted leader Bangabandhu along with most of his family members and toppled his three-and-half-a-year-old government.

The Bengali nation witnessed the history’s most heinous incident that day when Bangabandhu devoted himself to implementing his dream of building the country as Sonar Bangla.

Bangabandhu’s two daughters – Sheikh Hasina and her younger sister Sheikh Rehana – escaped the carnage as they were in Germany at that time.

Marking the death anniversary, Prime Minister Sheikh Hasina paid rich tributes to Father of the Nation Bangabandhu Sheikh Mujibur Rahman by placing a wreath at the portrait of Bangabandhu in front of Bangabandhu Memorial Museum at Dhanmondi 32 in the capital.

After placing the wreath, the premier stood in solemn silence for some time, showing respects to the great leader.

A smartly-turned-out contingent of Bangladesh Armed Forces gave state salute at that time, while bugle played tune of grief and somber to the last post.

Munajat was also offered, seeking eternal peace of the departed souls of the August 15 carnage.

After paying tributes to Bangabandhu, the premier along with her daughter Saima Wazed Hossain visited the historic residence of Bangabandhu at Dhanmondi 32 which witnessed the world’s most barbaric carnage that day 45 years ago.

Sheikh Hasina stayed in the house, which has now been turned into Bangabandhu Memorial Museum, for some time.

From Dhanmondi, the Prime Minister later went to Banani Graveyard where her mother Bangamata Fazilatun Nesa Mujib, three brothers Sheikh Kamal, Sheikh Jamal and Sheikh Russell and other martyrs of August 15 were laid to eternal rest.

The prime minister placed floral wreaths and spread flower petals on their graves.

She also offered Fateha and doa, seeking eternal peace of the departed souls of the martyrs of August 15.

The assassination of Bangabandhu dealt a major blow to the spirit of the country’s liberation war.

The country witnessed politics of killing, coup and conspiracy after his assassination.

The world community strongly protested and condemned the killing of the iconic leader, saying it is an irreparable loss to millions of the people of Bangladesh.

August 15 is a black chapter of the country’s history as the vested quarter, by capturing state power, trampled people’s long-cherished desire for an economic emancipation.

After Bangabandhu’s killing, the country had been under a military and quasi-military rule for 15 years. The spirit and objective of the liberation war was in jeopardy during the period.

The saga of the Bengali nation’s long-drawn struggle for independence under the iconic leadership of Bangabandhu was nakedly twisted by the stratocracy.

Awami League, led by Bangabandhu Sheikh Mujibur Rahman, struggled for 24 years against the tyranny of West Pakistan inflicted on Bangalees.

As a continuation of the struggle, Awami League under the leadership of Bangabandhu Sheikh Mujibur Rahman secured a brute majority in the 1970 elections.

But, the Pakistanis chose heinous tactics not to hand over power to Bangabandhu and conducted one of the history’s brutal pogroms.

Bangabandhu in the early hours of March 26 in 1971 officially proclaimed the country’s independence to rid the nation of the repression and killing of Bangalees by then Pakistani autocratic ruler.

Responding to the clarion call from Bangabandhu, Bangalees stood against the Pakistanis and engaged in the bloody war against Pakistani occupation forces and achieved the victory.

The nation, however, started observing the month of mourning from August 1, recalling the most brutal killing in its history and renewing the pledge to safeguard perpetually the country’s independence and sovereignty.

The programmes, include hoisting of the national flag at half mast atop all government and non-government offices and Bangladesh missions abroad.

Special prayers and milad mehfils were also held at all religious institutions and Bangabhaban.