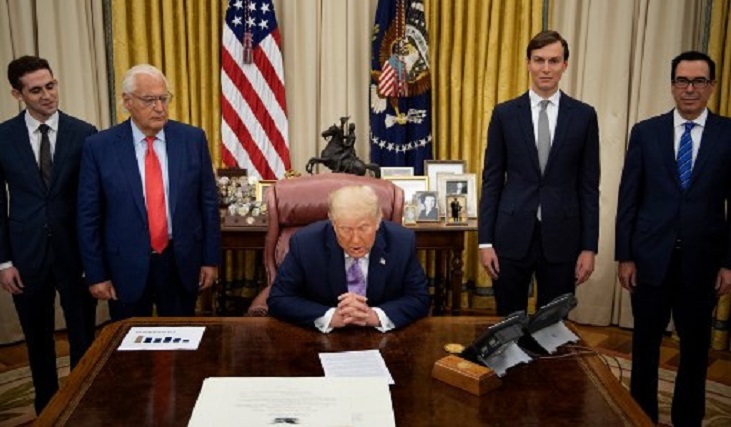 Iran on Friday strongly condemned an agreement between Israel and the UAE to normalise ties, blasting it as an act of "strategic stupidity" that would only strengthen the Tehran-backed "axis of resistance".

The agreement between Israel and the United Arab Emirates, announced by US President Donald Trump on Thursday, is only the third such accord Israel has struck with an Arab state.

In it, the Jewish state pledged to suspend annexation of Palestinian lands, although Prime Minister Benjamin Netanyahu stressed that did not mean it was abandoning plans to the Jordan Valley and Jewish settlements across the occupied West Bank.

The Iranian foreign ministry denounced the deal as an act of "strategic stupidity from Abu Dhabi and Tel Aviv which will undoubtedly strengthen the resistance axis in the region".

"The oppressed people of Palestine and all the free nations of the world will never forgive the normalising of relations with the criminal Israeli occupation regime and the complicity in its crimes," a ministry statement said.

Establishing diplomatic ties between Israel and Washington's Middle East allies, including the oil-rich Gulf states, has been central to Trump's regional strategy to contain Iran.

Calling the move "shameful" and dangerous, Tehran warned against Israeli interference in the Gulf and said the UAE should "accept responsibility for all the consequences" of the agreement.

In a veiled reference to its main regional rival and Emirati ally Saudi Arabia, it slammed rulers who harm the people of Palestine and Yemen "from their glass palaces".

The UAE had downgraded its relations with Iran in January 2016 amid a spike in tensions between Saudi Arabia and the Islamic republic.

Relations between Tehran and Riyadh deteriorated further last year following a series of mysterious attacks on tankers in sensitive Gulf waters, which Washington blamed on Iran.

Saudi Arabia and Iran, the region's two leading powers, back opposing sides in several conflicts, including in Syria and Yemen.

"Abu Dhabi has made the Emirates into Israel's heaven for ten years," working with Mossad to create "espionage and intelligence networks", he said in a tweet.

"No Islamic fighter and no proud Arab betrays Palestine. Only those without a backbone stab in the back."

Ellie Geranmayeh, analyst at the European Council on Foreign Relations, argued on Twitter that the normalisation is unlikely to be a "game-changer" for Iran.

She noted that the Islamic republic has long worked the assumption that Saudi Arabia, the UAE and Israel have been covertly cooperating against it for years.

The spokesman for Iran's Guardian Council, Abbas Ali Kadkhodaee, tweeted that the move meant Israel was "occupying the UAE".

And in an editorial published on Friday, Iran's state news agency IRNA dismissed the agreement as neither strategic nor historic -- simply a manoeuvre by Trump to boost his re-election hopes.

"This measure by Trump's team is neither a step to solve regional problems and support the UAE, nor does it help Palestinians or Netanyahu," it said.

Saying that many of Iran's Arab neighbours already have ties with Israel, it noted that the agreement will not have much impact "aside from infamy for regional states and domestic use for Trump."

"Trump is far behind his (Democratic) opponent Joe Biden and needs a shock to the American public to change his circumstances," the agency said.

It predicted that in the three months left to US elections, Trump would also announce Israel's normalised ties with Saudi Arabia, Bahrain and Kuwait, for the same purpose.