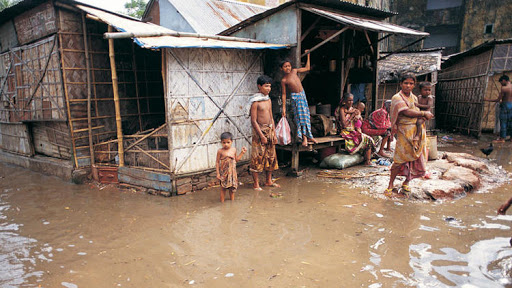 Flood situation continues to improve around the country, as the water levels in major rivers have marked a fall during the last couple of days.

Displaced people have begun to return home following the improvement in the flood situation.

But they are now living under the open sky as their dwellings have been washed away by floodwater. Now, they are seeking assistance to erect their houses and plant crops again.

The government has distributed relief among the flood victims in the affected areas, but these are not adequate, said the victims.

They are desperately looking for relief. If they find any boat or vehicle approaching, they rush towards it to get food aid.

They have been suffering a lot due to acute scarcity of food, pure drinking water and fuel oil, as government’s relief is too meager to meet their demands.

Locals also fear an outbreak of diarrhoea and other waterborne diseases in the flood-affected areas.

Arifuzzaman Bhuiyan, executive engineer of Flood Forecasting and Warning Centre (FFWC), said, “Brahmaputra-Jamuna river is in rising trend and it may continue for the next 48 hours.

Flood situation may improve in the low lying areas adjacent to the Dhaka City Corporation in the next 24 hours, he said.

Five major rivers are flowing above danger level at six river stations on Wednesday, according to FFWC.

So far 5.4 million people have been marooned by flood in 1086 unions of 165 upazilas under 33 districts, according to National Disaster Response Coordination Centre.

Scores of dwelling houses, schools, colleges, mosques and roads have been washed away due to river erosion rendering thousands of people homeless.