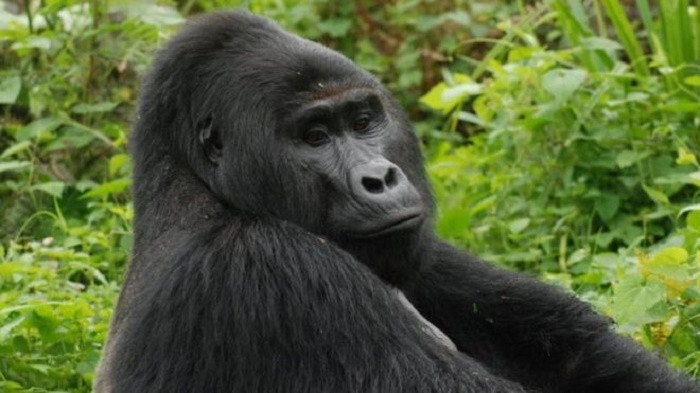 The killer of one of Uganda's best known mountain gorillas, Rafiki, has been jailed for 11 years.

Byamukama had said the gorilla attacked him and he had to kill Rafiki in self defence, according to the Uganda Wildlife Authority (UWA).

Mountain gorillas are endangered with just over 1,000 in existence and the UWA said "Rafiki has received justice".

Byamukama also pleaded guilty to killing a small antelope, known as a duiker, and a bush pig, as well as being in possession of bush pig and duiker meat.

He admitted to the UWA previously that he, and three others, had gone to Bwindi Impenetrable National Park with the intention of hunting smaller animals and that he killed Rafiki in self-defence when he was attacked.

Investigations showed Rafiki was killed by a sharp object that penetrated his internal organs.

The gorilla went missing on 1 June and his body was discovered by a search party the following day.

A UWA team tracked Byamukama to a nearby village, where he was found with hunting equipment.

Three others denied the charges and have been remanded in jail, awaiting trial.

The silverback, believed to be around 25-years-old when he died, was the leader of a group of 17 mountain gorillas.

This group of gorillas was described as habituated, meaning that its members were used to human contact.

"The death of Rafiki leaves the group unstable and there is the possibility that it could disintegrate," Bashir Hangi from the UWA told the BBC in June.

"It has no leadership at this time and it could be taken over by a wild silverback."

If that happened, the group would not want to come into contact with humans, which ultimately could affect tourism.

The mountain gorillas are a popular draw for visitors to the country and the UWA relies on the tourists for revenue.

Rafiki himself was very popular with people who had come to the Bwindi Impenetrable National Park, Mr Hangi said.

The mountain gorilla species is restricted to protected areas in the Democratic Republic of Congo, Rwanda and Uganda.

They can be found in Uganda's Bwindi Impenetrable National Park and a network of parks in the Virunga Massif range of mountains which straddle the borders of the three countries.

In 2018, the mountain gorilla was removed from the list of critically endangered species by the International Union for Conservation of Nature, after intensive conservation efforts, including anti-poaching patrols, paid off.

The IUCN now classifies the species as endangered.