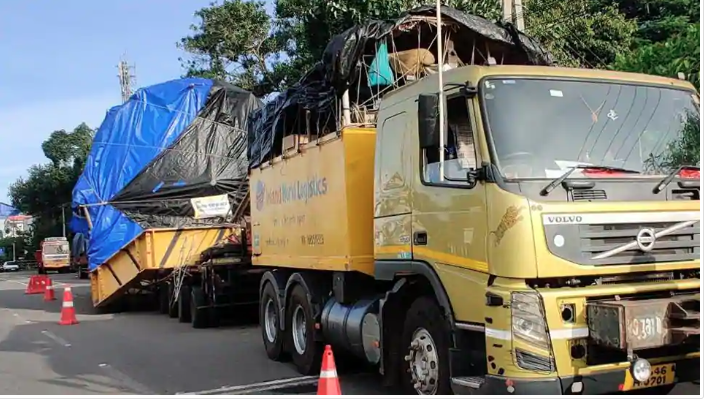 Usually, a truck, covering a similar distance spanning five states, takes a maximum of seven days to reach its destination.

But the giant-on-wheel was a mean machine, which kept other vehicles off the roads when it was on the move and in every district of the five states that the heavy-duty truck covered it was escorted by police vehicles in a bid to guard the state-of-the-art machinery.

The mammoth journey that had started on September 1, 2019, had its share of spin-offs.

The vehicle’s arduous trek ensured pot-holed roads were repaired, overgrown branches of trees were pruned and electric poles were removed to make way for the gargantuan vehicle.

While at two places, iron girders had to be installed to ensure its smooth passage across rickety bridges.

The tenure of the journey also got extended because of the unprecedented raging coronavirus disease (Covid-19) outbreak, which led to the imposition of nationwide lockdown restrictions from March 25 in a bid to contain the pandemic.

“Lockdown made our movement miserable. In Andhra Pradesh, our vehicle was held up for a month due to lockdown. Later, our agency had to intervene. But, still, it was a challenging task. Fortunately, engineers and mechanics were at hand in our team of 30 that accompanied the Volvo FM heavy-duty truck,” said Subhash Yadav, an employee of a private agency that was assigned to shift the autoclave from Nashik to VSSC.

The machinery took up the bulk of the vehicle’s space because it measured 7.5 metres in height and 7 metres in width, he added.

“The aftershocks of the viral outbreak were felt during the momentous journey. For instance, in Kerala, an old lady urged us to make Covid-19 vaccine rather than send rockets to space. Many of us made the entire journey on foot. It was a challenging experience for us,” said another team member.

A VSSC official said the heavy machinery would not be dismantled. The autoclave would be used to manufacture large aerospace products for various programmes and it is expected to be commissioned in July after making necessary modifications, he added.