Gronthomongol: For the love of books, and our debt to Nilkhet 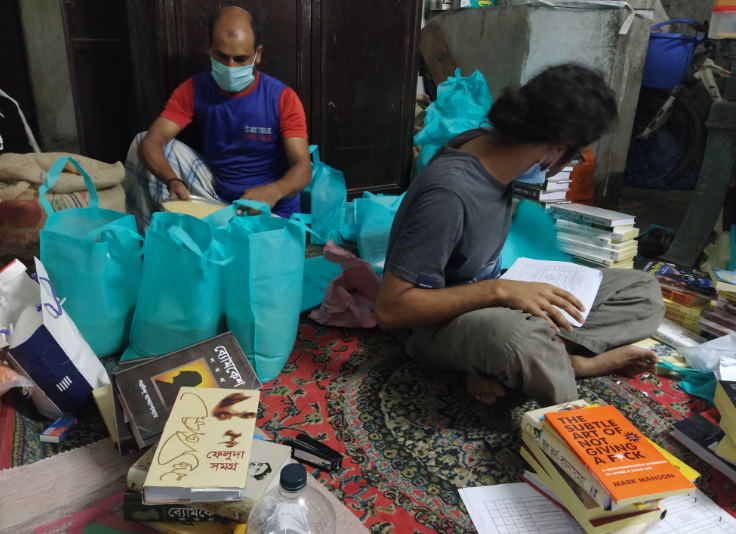 For as long as almost anyone can remember, Nilkhet in the heart of the capital has been known as the hive of bookworms, where students, academics, publishers, booksellers and photocopy shops meshed together in an informal industry unto itself.

Since March however, the deadly and indiscriminate strike of the COVID-19 pandemic has also served to cripple this cutthroat market-meets-noisy library, and its charming used books corner, nestled slightly apart from the main market, where you were as likely to find the complete works of Honore de Balzac as obscure histories of BAKSAL.

Thankfully however, a group of young and enterprising connoisseurs is determined to defy the curse of the virus on their reading habit, by helping some of the countless sellers who own the individual stores that make up Nilkhet get into the ever-growing online marketplace for books.

Gronthomongol, a project of the Pashe Achi Initiative (Standing With) stemmed from when co-founders Tahmid Hasan and Rafiul Chowdhury witnessed two booksellers’ futile attempts at selling books streetside in a nearly empty Nilkhet - itself a scene hard to imagine.

“Back then we just supplied essential foods to the homeless as part of our humanitarian initiative,” Tahmid, also a student at nearby Dhaka University - an extremely important factor behind the Nilkhet legend - told.

“We realized that these sellers who make ends meet for a negligible profit need to be helped out too. Some of them were even forced to sell their shops after going out of business...If this continues, bookshops in the area would gradually deplete and that will be unbearable for the country's book lovers.”

Initially, PAI bought books from those two sellers in bulk and started selling those at a fixed rate of Tk 200 through Facebook. Witnessing the overwhelming response they received, they soon rolled out the Gronthomongol project, with the specific aim of helping a greater number of Nilkhet booksellers stay in business.

“Earnings from these books are also spent on humanitarian causes. Initially, a part of the proceeds were used in helping underprivileged people who got hit hardest by the pandemic. Now we are also providing aid to flood-affected communities in different parts of the country,” Tahmid disclosed.

Having started in May, the project is currently working with over 50 of the bricks-and-mortar stores in the Nilkhet area. Other than volunteers of Pashe Achi Initiative, the project now employs jobless labourers for packaging and out-of-work ridesharing for delivering books.

Initially, the project only sold new books bought in bulk but now they are also collecting secondhand and rare books from the Nilkhet sellers. Apart from them, the Gronthomongol project often receives donated books from the buyers. Through the PAI Facebook page, they sell both academic books and the more literary kind.

Tahmid considers the project necessary to sustain the incomes of low-margin enterprises who clung on to small businesses before the coronavirus pandemic hit, and then were left without any income. Anybody who has been to Nilkhet will realize that ‘social distancing’ is one concept not found in any book ever sold in the market.

“It’s a question of survival and providing them with financial aid in this crisis period is in turn helping out the nation,” he said.

He also noted that although they started the project to support book stores, the ever-growing economic crisis caused by COVID-19 is still putting many of them out of business.

Pashe Achi Initiative is at present looking to expand project Gronthomongol, alongside their other humanitarian efforts throughout the country, the founders informed journalists. Currently, they are shipping books outside Dhaka at an added delivery charge of Tk 150, while delivery inside Dhaka is free.

In true Nilkhet style, they have an offer you cannot refuse.