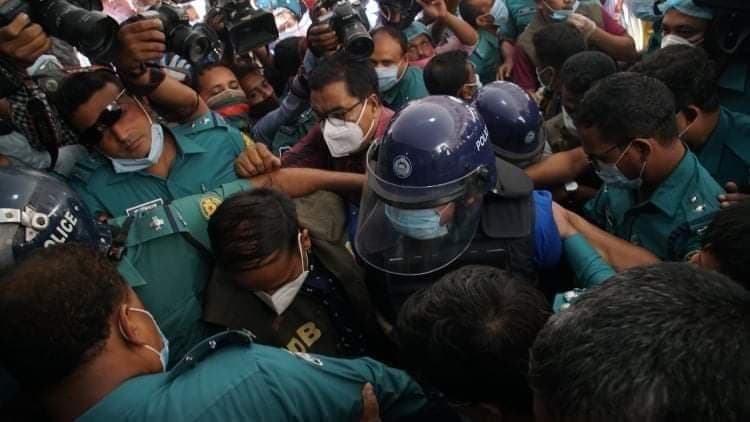 The court also placed Regent Group Public Relations Officer Tariqul Islam alias Tareq Shibl on a seven-day remand in the same case. He was placed on a five-day remand on July 10 that ended on Wednesday.

Metropolitan Magistrate Mohammad Jasim passed the order after SM Gaffarul Alam, an inspector of Detective Branch (DB) of police and also the investigation officer of the case, produced them before the court with a 10-day remand prayer.

Defence counsels, however, argued for cancelling the remand and releasing them on bail.

After hearing both the sides, the court passed its order amid a heightened security in and around the court.

During the hearing, only counsels from both the sides were allowed in the court, barring others including the newsmen from entering there.

Earlier on Wednesday, Rapid Action Battalion (RAB) personnel arrested Md Shahed along with an illegal firearm in a border area of Satkhira while he was trying to cross the border by a boat.

Shahed was on the run after a case was filed against him on July 7 for issuing fake Covid-19 test reports in his Regent Hospital.

According to an RAB intelligence report, Regent Hospital collected samples from at least 10,000 people. Some 6,000 of them got fake Covid-19 test reports.

On July 7, the RAB sealed off Regent Hospital's head office in the capital, and two of the hospital's branches in Uttara and Mirpur, on charges of issuing fake Covid-19 certificates and other misdeeds.

The crime-busting force filed a case against 17 persons, including Regent Group Chairman Shahed, for their alleged involvement in issuing fake Covid-19 certificates and other misdeeds.

On July 9, Bangladesh Bank (BB) instructed all the banks to freeze Shahed’s bank accounts for the next 30 days.

Police also imposed a travel ban on Shahed in the interest of proper investigation into the case. Police sent a letter to the Immigration Department in this regard on July 9.

RAB members seized the passports of Shahed and his father on July 11. In a drive at Uttara Branch of Regent Hospital and the Regent Group head office, they also collected some important evidence, including a computer hard disk.

RAB Executive Magistrate Sarwar Alam was present in the investigation team. He opened the sealed office.

A total of 59 cases have been filed against Shahed on charges of cheating and forgery, sources said.

Besides, a case was filed against Shahed on July 14 on a charge of embezzling more than Tk 91 lakh from a transport exporter in Chattogram.