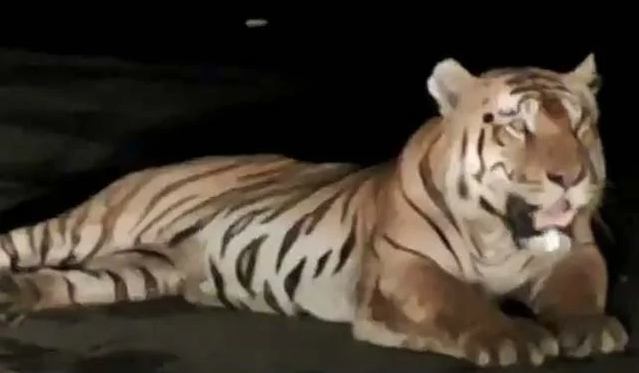 A full grown tiger was spotted resting in the middle of a flyover in Madhya Pradesh of India in a shocking video going viral online. The scene was captured by eyewitnesses who had to wait on the road as the tiger reposed.
The incident occurred on National Highway 7, which falls inside the buffer zone of Pench National Park - about 25 kilometres away from Seoni district. There was reportedly some construction work going on in the area when the tiger appeared and sat down in the middle of the road, creating a flutter among eyewitnesses and halting traffic. One video going viral on social media shows the tiger panting in the middle of the road, while another - filmed from inside the car - shows witnesses wondering if the tiger would launch an attack on the vehicle.

The big cat, however, did not attack anyone or harm any vehicles. Eyewitnesses informed the forest department and a police team also reached the area after receiving reports of the tiger sighting.  After resting for a while on the flyover, the big cat got up and went towards the forest on its own.
Footage of the hair-raising incident has elicited stunned responses online.

The area is close to the Pench National Park, which is home to a large number of tigers. Now, elevated stretches on the highway between Seoni to Nagpur are being constructed to facilitate easier movement of tigers and other wildlife.

In April this year, four tigers resting on a road in the Satpura forest of Madhya Pradesh had captured social media's attention.