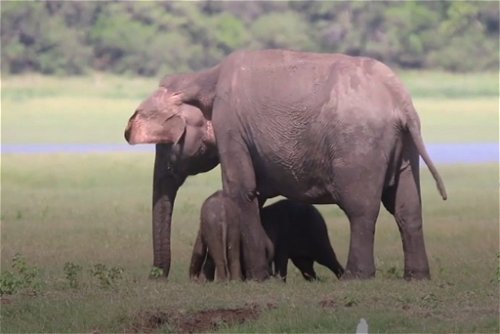 An elephant has given birth to twin calves in Sri Lanka’s Minneriya national park in the island’s north-central province, local media reported Wednesday.

Director of Wildlife Health at Department of Wildlife Conservation Dr. Tharaka Prasad told local journalists that the calves were three to four weeks old when they were spotted on Wednesday.

“This is a rare and special occasion. Hence, we are taking all the measures to protect these twin babies and their mother,” Dr. Prasad said.

“This observation has been made by one of Sri Lanka’s acclaimed researchers on elephants and a former Director General of the Department of Wildlife Conservation Dr. Sumith Pilapitiya, along with officers of the Minneriya National Park,” he added.

The Wildlife Department requested tourists not to make a special effort to capture or film these elephant calves in a way that would disturb their habitat.

Sri Lanka has a large elephant population protected by law. Killing wild elephants is an offense punishable by death, but there have been regular reports of villagers poisoning or shooting them.