Flood may remain steady in five districts, improve in eight 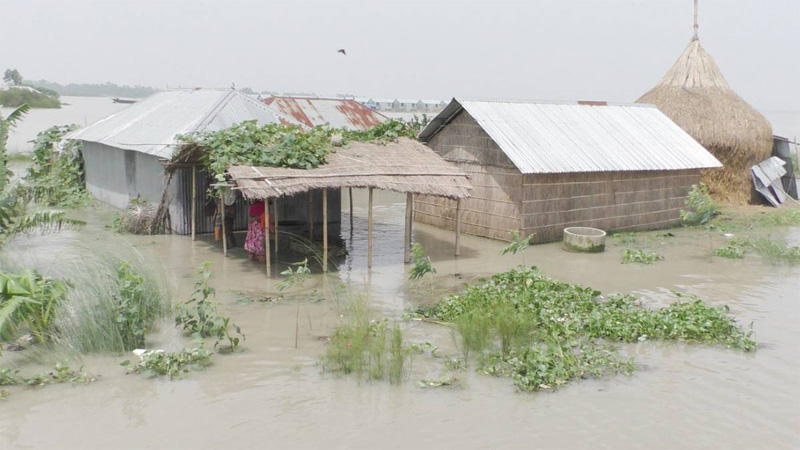 The flood situation may remain steady in five central districts of Rajbari, Manikganj, Dhaka, Faridpur and Shariatpur as water levels of all rivers in the Ganges-Padma basin stayed steady and rivers in the Brahmaputra basin showed a reducing trend, and it is likely to continue in next 24 hours.

The Padma was flowing 46cm, 20cm and 11cm above its danger mark (DM) at Goalondo, Bhagyakul and Mawa points respectively at 9am today with a rise of 2cm, 12cm and 12cm respectively in the last 24 hours, said a bulletin of the Flood Forecasting and Warning Center (FFWC).

Water levels of all rivers in the Brahmaputra basin marked a fall and it may continue in the next 48 hours. So, flood situation in eight northern and northeastern districts of Kurigram, Gaibandha, Lalmonirhat, Nilphamari, Bogura, Sirajganj, Tangail and Jamalpur in that basin is likely to improve in the next 24 hours, said the bulletin.

In the Brahmaputra basin, water levels of major two rivers–Teesta and Dharala– may fall in the next 24 hours, it said.

Water levels in all rivers in the Meghna or the Surma-Kushiyara basins marked a fall and it may continue in next 48 hours, the bulletin said.

Thousands of people in 10 northern and northeastern districts including Kurigram, Gaibandha, Lalmonirhat, Nilphamari, Bogura, Sirajganj, Jamalpur, Tangail, Sylhet and Sunmganj have been bearing the brunt of floods due to the onrush of water from the upstream in two major Brahmaputra and Meghna basins for the last several days.

According to FFWC, the recorded rainfalls were 108 millimeters at Sylhet station and 57 millimeters at Jakiganj station in the last 24 hours till 9am today in the downstream but there was rainfall recorded during that period in the upstream in the Indian northeastern states of Assam, Meghalaya, Sikkim and Tripura.

Water levels were flowing above danger marks (DM) at 17 points – 13 in the Brahmaputra-Jamuna basin, three in the Padma basin and one in the Meghna basin till 9am today. Water levels at 61 river stations out of total 101, monitored by FFWC, marked a rise while 39 stations recorded a fall and one other steady.

The Brahmaputra was flowing 24 cm above the DM at Noonkhawa and 29cm above the DM at Chilmari points with 17cm fall at both points while Dharla 60cm above its DM at Kurigram, Teesta 18cm at Dalia and Ghagot 27cm at Gaibandha point with 11cm rise, 36cm rise and 04cm fall respectively during that period.

In the Meghna basin, the Old Surma was flowing 2cm above its DM at Derai point with 08cm fall at 9am today.

Our Rangpur Office reports: With recession of overflowing water from upper catchment, the flood situation continued to show an improving trend in the Brahmaputra basin during the last 24 hours ending 9 am today.

Bangladesh Water Development Board (BWDB) officials said the major rivers were still flowing above their danger marks (DMs) at 10 points in Nilphamari, Kurigram, Jamalpur, Bogura and Sirajganj at 9 am today despite dropping of water levels.

Talking to BSS, Executive Engineer of Teesta Barrage Project, BWDB M Rabiul Islam said flood situation alongside the Teesta is likely to improve in next 24 hours as the level of onrushing water from the upstream already started receding.

Executive Engineer of BWDB Mokhlesur Rahman for Gaibandha said all flood control embankments and structures are safe and riverbank protection works continuing at few places in the district.

In Thakurgaon, low-lying areas have been inundated, roads and crops were damaged due to rise of water levels in the Tangan river caused by onrush of water from upstream rivers and heavy downpours in the last three days.

Worry grips the people living either side of the river and low-lying areas as flood water may damage their crops and houses and livestock.

In Dohar upazila in Dhaka district, Padma waters flooded low-lying areas near Nayabari Dhoair Bazar overflowing the embankment while the people fear that Dhoair Bazar and its adjoining areas will go under the Padma if steps are not taken immediately.