Red-green flag is my existence, I stand beside Shib Narayan Das 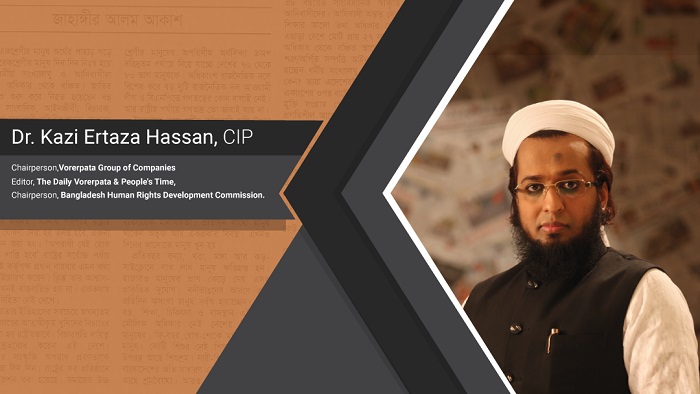 I totally stop myself from getting out of the home during the ongoing coronavirus pandemic. For the sack of the safety of family, I have been keeping myself confined at home for the last three months following health guidelines.

In this situation, I’m doing almost all my job using online platforms, also keeping all in touch. Time has been passing out in planning and instructing for “Bhorer Pata Songlap”, a regular item of the daily “Bhorer Pata”. In the meantime, two days ago, I came to know about the financially troubled helpless situation of Shib Narayan Das, the designer of the National Flag of Bangladesh. I could not hold my emotions anymore as I believe that the red-green flag mixed with my existence. So, it is my moral duty as well as a responsibility to stand beside Shib Narayan Das, the designer of our red-green flag.

On Friday night, a report titled “Red-green flag designer Shib Narayan gets financial assistance from Dr Kazi Ertaza Hassan” published in the online version of the daily “Bhorer Pata”. Since then, many people have contacted me. Even, I received a thanksgiving phone call from the Prime Minister’s official residence “Ganabhaban”. Prime Minister Sheikh Hasina became very much pleased with my initiative and informed me that she would take all responsibilities of Shib Narayan Das.

I think the people of independent Bangladesh got the ever-desired red-green flag through the glorious liberation war in 1971. Our national flag which we achieved in exchange for the live of 3 million martyrs and the respects of 2 lakh mothers and sisters is the symbol of our unity and sovereignty. It’s unfortunate but true, many freedom fighters are living an inhuman life in independent Bangladesh. The daughter of the Father of the Nation Bangabandhu Sheikh Mujibur Rahman, Prime Minister Sheikh Hasina has always stood by the freedom fighters and helpless people from the beginning. It also has to be admitted that the freedom fighters are in a better situation now than any other government. The allowances of the freedom fighters have also increased several times.

As long as Bangladesh exists, we will have the red and green flags. When the designer of this flag lives a financially helpless life, I myself feel guilty. I have stood by Shib Narayan Das as a soldier of Bangabandhu Sheikh Mujibur Rahman’s ideals and a worker of Prime Minister Sheikh Hasina. I have learned from our Prime Minister how to stand by the people. Our Prime Minister Sheikh Hasina is working tirelessly to tackle the ongoing coronavirus crisis that is being lauded in our country and all over the world.

Here I like to mention that journalist Supan Roy first wrote about the illness and financial hardship of Shib Narayan Das on social media Facebook. Besides, an organisation called Speak Out has taken responsibilities for him. Shib Narayan Das is the designer of the red and green flag of independent Bangladesh. He was also the general secretary of undivided Comilla district Chhatra League.