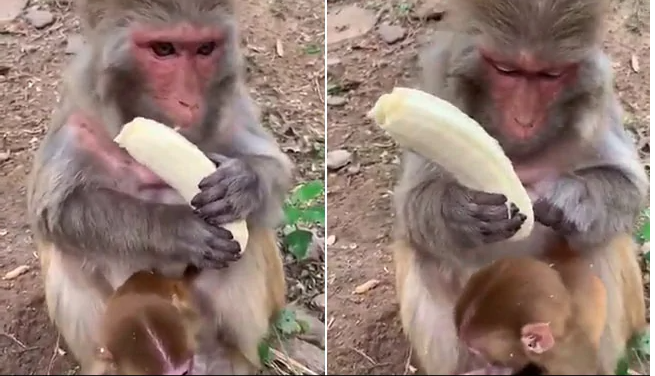 That monkeys and humans are similar in many ways is not a new or surprising fact. While chimpanzees are our closest living relatives in the animal kingdom, gorillas have been filmed walking on two legs like humans. However, one little-known behaviour trait of monkeys has left many surprised.

A video going massively viral online shows a monkey carefully removing fibrous threads from a banana and has left millions marvelling at the similarity between humans and monkeys.

In the adorable video, a monkey can be seen sitting near a tree stump with her baby tumbling and crawling around her. The monkey is seen busy in the task of peeling and preparing a banana for eating by removing the "stringy bits" of the fruit - much like the way many humans do.

She seems completely disgusted by the threads - carefully removing each one and even throwing them quickly away when a couple of them fall on her baby.

"They don't like the stringy bits on bananas either!" wrote a Twitter user while sharing the video on the microblogging platform, where it has gone viral.

they don’t like the stringy bits on bananas either!!!! i don’t know what i’m going to do with this info yet but it makes me happy to know. pic.twitter.com/pj1TgNMMq3