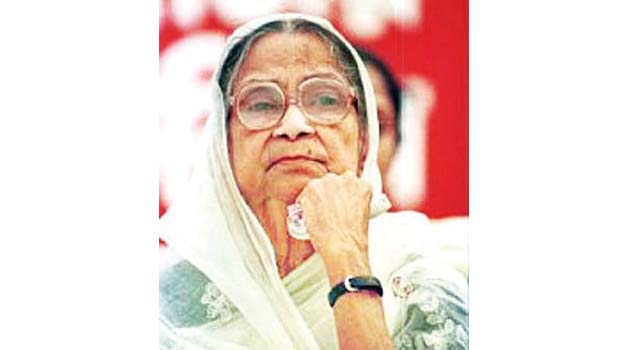 Prime Minister Sheikh Hasina today said poet Begum Sufia Kamal was one of the pioneers of the movements for women emancipation and democracy in Bangladesh.

In a message on the eve of poet Sufia Kamal’s 109th birthday, she paid profound respect to memories of the poet saying she (Sufia) bore the image of a traditional Bengali woman in one hand and on the other, played an uncompromising and firm role in every movement in Bangladesh.

The thoughts of Begum Rokeya, the pioneer of woman renaissance, had a longstanding impact on her life, she said.

The premier said Dhaka University’s first female dormitory was named after Begum Rokeya as per the demand of Sufia Kamal.

Sheikh Hasina said Sufia Kamal waged a movement in protest against the Pakistan government’s imposing of a ban on airing Rabindra Sangeet on radio in 1961.

The prime minister said Sufia Kamal’s contribution to the 1952 Language Movement, 1969 Mass Upsurge, Non-cooperation Movement and Liberation War in 1971 and also democratic, cultural and education movements in independent Bangladesh earned for her the ‘Janani Sahasika’ title.

The Awami League government has set up a female dormitory after the name of Begum Sufia Kamal, she added.

She said Sufia Kamal’s vibrant role inspired the pro-liberation forces when the distortion of history began in the country following the assassination of the greatest Bangalee of all times, Father of the Nation Bangabandhu Sheikh Mujibur Rahman in 1975.

She said Sufia Kamal had a great innovative mindset and her write-ups on the country, nature, democracy, social reform, women emancipation and children continue to inspire readers even today.

The prime minister prayed for eternal peace of the departed soul of Begum Sufia Kamal.