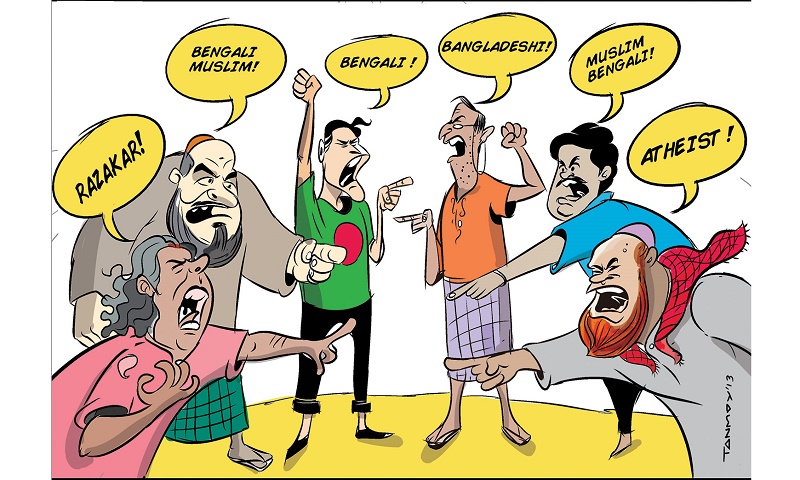 The neo Razakars have again started conspiracy to weaken the government of Prime Minister Sheikh Hasina, at a time when Bangladesh is struggling to cope with the various problems caused by the Corona epidemic. The neo-Razakars, are vigorously propagating that India is desperate to take control of Bangladesh's military. The sole purpose of such propaganda is to overthrow the Sheikh Hasina government. To achieve this goal they are working secretly to confuse and provoke the people. Two enemies of our independence time are sponsoring these notorious neo-Razakars.

Sheikh Hasina has been in power for more than a decade. By this time, she not only showed the people several dreams, but also took Bangladesh to the brink of the developed world. The capital Dhaka have a flyover or a subway, it was like a dream even ten years ago. Now it is a very reality. The first phase of the Metrorail will be completed by the middle of next year. It will start running on the 21 km long flyover from Motijheel to Uttara on our next Victory Day.  By 2030, the construction of 175 km of railways (mostly underground) in the entire city of Dhaka will be completed. It is hoped that the people of the capital will be completely free from the curse of traffic jam by then. Besides, the work of our dream project ‘Padma bridge’ will also be completed next year. Even if the bridge is opened for traffic at this time, it may take another one or two years for the railway line to be completed. Through this, a long cherished dream of the people of South and South-West Bengal will be realised. With the completion of Padma Bridge, the country's GDP will increase by at least two percent.

The neo-Razakars and their foreign allies are sure if these projects are implemented, the popularity of Sheikh Hasina and her government will go out of reach. So, they have been conspiring one after another to ensure that these public works do not end. In order to stop the activities of Metrorail forever, they carried out a bloody attack on Holy Artisan Restaurant in Gulshan of the capital on July 1, 2016 with the help of IS militants.  Among others, six Japanese and nine Italian engineers involved in the construction of the Metrorail were killed by the IS militants. Although the Metro Rail work was stopped for some time, Prime Minister Sheikh Hasina was able to bring the concerned countries back to work.

On the other hand, the implementation of the Padma Bridge was supposed to be completed 5 years ago. But it could not be done due to the conspiracy of this neo-Razakars. At the beginning of the construction work, a fabricated allegation was made by the World Bank. Later, they refused to give the promised loan. It did not take long for Prime Minister Sheikh Hasina to figure out their conspiracy.

‘Of course there will be a Padma Bridge but we do not want loan from the World Bank; it will be at Bangladesh's own expense’ said Sheikh Hasina instantly. Though the World Bank moved away from their position after the work began but Sheikh Hasina was no longer willing to listen to the World Bank. Today the Padma Bridge is hard, real, true and glowing.  Besides these, Sheikh Hasina has been working relentlessly for the economic prosperity of Bangladesh & her government effectively suppressed Islamic fundamentalism and terrorism. This achievement caught the attention of the world.

Now, in all areas of development Bangladesh has been getting the cooperation of India, a close neighbour and a trusted friend of the Liberation War. The neo anti-independence Razakars are unhappy with this. In 1971, the Indian forces fought against the Pakistani forces, along with the freedom fighters. From then, these anti-independence forces have been spreading propaganda. Then they used to say if the Pak army was defeated, the Indian army would occupy Bangladesh. In reality, nothing like that happened. On the contrary, the then Prime Minister of India Indira Gandhi withdrew all Indian troops from Bangladesh as soon as Bangabandhu Sheikh Mujibur Rahman, the Father of the Nation desired.

India has not yet established any base or outpost in Bangladesh. On the contrary, it has always been providing all kinds of cooperation to Bangladesh. Whether it is the Congress, the BJP or any other party in power, this custom is unchanged. However, while Begum Khaleda Zia was in power, rebels in northern India, with the support of the BNP-led coalition government and the ISI, set up secret bases in Bangladesh. Using Bangladesh territory they regularly attacked inside India. But, the Indian army never crossed the border nor carried out repression operations against the rebels. Instead, the BNP leaders were humbly requested to send back the Indian rebels. But Begum Khaleda Zia did not send the Indian rebels back to the country on the advice of the Pakistani intelligence agency ISI. On the other hand, soon after Sheikh Hasina came to power, almost all the rebels were sent back in `packets’ and the rest fled.

So, India is a tested friend of Bangladesh and this friendship has never been an obstacle to Bangladesh's relations with other countries.  China has so far invested 3 lakh 22 thousands 296 crores Taka in Bangladesh. Of this, the amount of cooperation in the defence sector of Bangladesh is about 72 percent. Besides, China has invested in the Padma Bridge and 1320 MW thermal power plants at Patuakhali. Bangladesh is even a partner in China's 'One Belt, One Road' project.

But we can remember China opposed and criticised our Liberation War in 1971. Besides, at the last stage of the war there was a rumour that China eager to enter the then East Pakistan through Indian territory and will help the Pak army. On the other hand, India has fought side by side with the freedom fighters, ignoring all kinds of criticism and threats from China. Through this war, an independent Bangladesh emerged. But after the war they did not stay in Bangladesh even for an extra day.

In 2002, when the BNP was in power, Bangladesh signed a defence agreement with China. Despite being closest neighbour, India has never opposed the agreement or interfered in Bangladesh's internal affairs. Rather, it warned Bangladesh about the presence of Indian rebels on its territory. Despite the increase in insurgent activities, Indian forces have never crossed the border into Bangladesh. Even after 18 BSF members were killed in ‘Pirdiba’ near the Meghalaya border. India always remained silent. They have always chosen the path of mutual discussion to solve the problems.

Meanwhile, Indian Prime Minister Narendra Modi was scheduled to visit Bangladesh last March to attend the inaugural ceremony of the birth centenary of Father of the Nation Bangabandhu Sheikh Mujibur Rahman. But the tour was postponed due to a sudden outbreak of the corona virus throughout the world. But Pakistani and pro-China forces say the visit was aimed at strengthening India's military control in Bangladesh. In fact, India signed a defence agreement with Bangladesh in 2016. Under the agreement, they agreed to lend 500 million US dollars to Bangladesh.

Many countries, including Bangladesh, Sri Lanka and Nepal, use India's defence infrastructure to train their troops in counter-terrorism. But here too, the ISI-backed anti-India forces are playing the same tune. According to them, India wants to control the military power of Bangladesh through this. In fact, the basis of India's foreign policy is a sense of world brotherhood and anti-hegemony.

At various times India sent troops to Sri Lanka, Bhutan and the Maldives to quell insurgency. However, they returned to the country soon after the performance. Therefore, the so-called 'blueprint' of the Indian military in Bangladesh is completely false. On the contrary, India has once again proved its sincere friendly relations with Bangladesh by sending the necessary medicines and kits to Corona during the disaster.

The people of Bangladesh are not ungrateful either. They always remember with gratitude India's contribution to the War of Liberation. So as long as Bangladesh exists, as long as there is a single citizen of this country alive, no one has the power to ruin the friendly relations with India.