Bangabandhu's life a tremendous inspiration for all: Modi 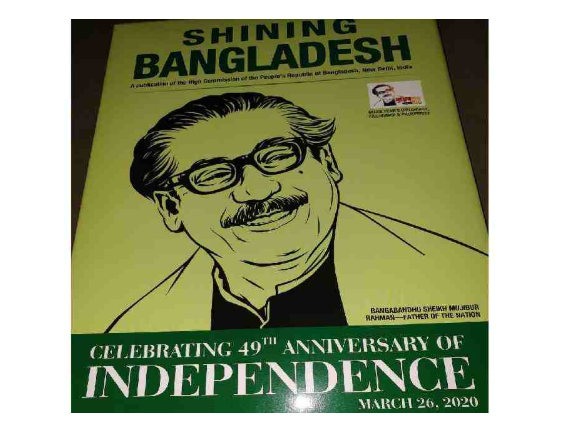 Bangladesh High Commission in New Delhi has brought out a special 'Coffee Table Book' to mark the 49th anniversary of Bangladesh Independence and National Day.

The 90-page publication, titled "Shining Bangladesh", has been dedicated to the celebration of the 100th birth anniversary of Father of the Nation Bangabandhu Sheikh Mujibur Rahman.

A special feature of the contents has been Prime Minister Narendra Modi’s homage to Bangabandhu in which the Indian Prime Minister described him as “one of the greatest personalities of the last century.”

“His life is a tremendous inspiration for all of us,” Modi said.

Besides messages from President Md. Abdul Hamid and Prime Minister Sheikh Hasina, the book contains some rare historical pictures on the life and political career of Bangabandhu.

Bangladesh High Commissioner to India Muhammad Imran, who contributed a write-up on warm bilateral relation between India and Bangladesh, appreciated the publication of the colourful book.

The CTB contains an English translation of Sheikh Rehana’s poem “Baba” done by Farid Hossain, Minister (Press) at the mission.

The publication of the book, scheduled to come out on the Independence Day, was delayed by over two months because of disruptions in normal life due to Covid-19, said the Bangladesh High Commission in New Delhi on Friday.