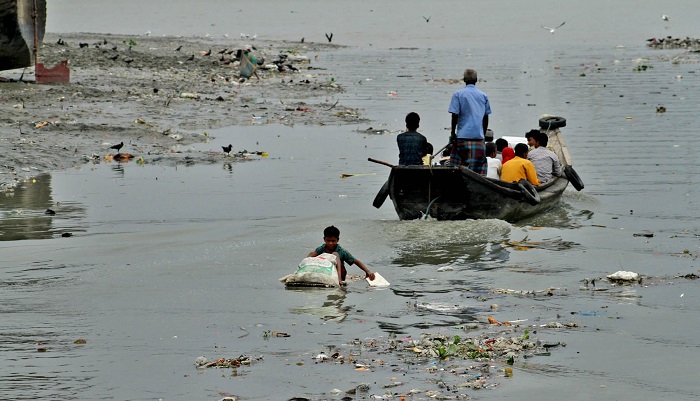 Pollution on the river Karnaphuli, considered as the lifeline for the port city, is continuing unabated, posing a great threat to the aquatic lives and ecosystem.

The low and high tide of the river remains as blessings for the environment, but experts fear that continuous dumping of solid and liquid pollutants will cause the river to meet the fate of Buriganga gradually.

Besides, the eviction drive that was started on the Karnaphuli riverbanks last year remained stuck in legal tangles.

As there are multi-dimensional sources of pollutants in the river Karnaphuli, absence of sewage treatment plant in the city, dumping of household solid and liquid wastages, improper use of Effluent Treatment Plant (ETP) at industries and spillage of oil from the water transports are largely blamed for the bad condition of the river.

Department of Environment (DoE) Chattogram Metro Director Nurullah Noori told the daily sun that the river is being polluted mindlessly every day.

The household solid and liquid waste produced by over six million city-dwellers find their way into the river through different canals and drains, he said.

The household pollutants have a great contribution to making the river condition worse, Noori observed.

Asked about the use of ETPs by industrial units on both the riverbanks, the director claimed that there is no heavy industry lacking ETP in the city and those which are yet to obtain the DoE clearance are not being allowed to go to production.

“The industrial pollution is now almost under control as we award financial penalty of huge amount to polluters and it scares them much. Some of the industries, including power plants, also faced closure for causing pollution to the environment in Chattogram,” he said.

“As they do business we don’t spare them on any condition. Even, the government industries also face punishment for failing to ensure release of treated waste,” said the director.

“We are also encouraging and pressurising the industries for reusing the wastewater so that the tendency of discharging untreated liquid waste reduces through it,” said Noori.

The DoE Chattogram boss also laid emphasis on the need for proper management of the clinical waste and resisting them from mixing up with the river water as those are very harmful to public health.

But, it was amazing to see that the parameters of water like PH, biological oxygen demand, chemical oxygen demand and dissolved oxygen came to close to the acceptable levels during the period of general holidays as pollutions came to an end then, said the researcher.

The authorities concerned should convince the industrialists and other polluters to put up the changes in nature so that they come forward to save the river, he suggested.

Earlier, the Chattogram district administration demarcated bank lines of the river as per the High Court order issued on July 18 in 2010 following a writ petition filed by the ‘Human Rights and Peace for Bangladesh.

They also identified over 2,000 small and large illegal government and private structures on both banks after completion of the demarcation in 2015.

In August, 2016, the High Court also directed the authorities concerned to evict some 2,106 structures built illegally on the riverbanks following some procedures.

Later, the administration started demarcating the bank lines afresh as part of eviction drive to free it from encroachers last year.

The much-expected drive to evict illegal structures from the riverbanks started finally on February 4.

But, the drive got stuck after evicting several hundred structures following legal complexities and it couldn’t be resumed till now.

Besides, eviction at some other spots cannot be carried out for cases filed by the different organisations and individuals, he said.

On the other hand, Chattogram Water Supply and Sewerage Authority (Cwasa) took a project in 2018 to set up a much-talked-about sewage treatment plant aiming at introducing sewerage system for around 1.2 million people.

The Project Director (PD) Engineer Mohammed Ariful Islam said they couldn’t float tender for setting up the plant due to the corona pandemic.

The process will be started soon after the situation becomes normal, he said adding that the project deadline is 2023.