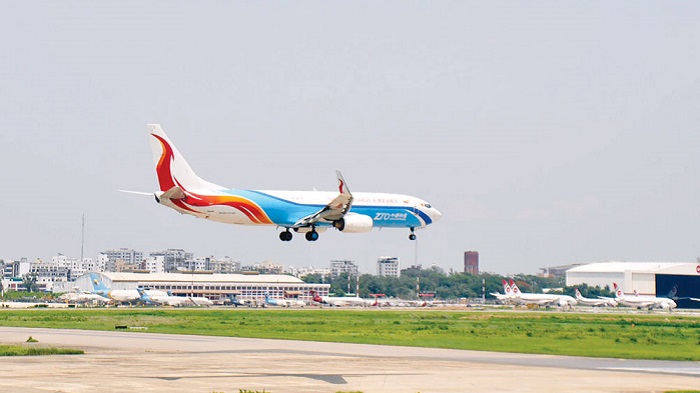 Domestic flight operation was resumed on Monday on a limited scale on three routes from the capital after more than two months of suspension while local carriers were forced to cancel seven scheduled flights due to poor passenger turnout.

However, the national flag carrier Biman cancelled its five flights out of scheduled six flights while US-Bangla Airlines voided two flights out of ten, however Novoair was able to operate its all seven scheduled flights to these three destinations from the capital.

“We were able to operate only one flight to Syedpur today as we had to cancel our five scheduled flights – two to Chattogram, two to Sylhet and one to Sydpur due – due to shortest of passengers,” Tahera Khandaker, deputy general manager (public relations) of Biman told BSS.

The first resumption flight of the national flag carrier left Hazrat Shahjalal International Airport (HSIA) for Saidpur at 7:45am with only 4 passengers on board and flew back with 20 passengers, she said.

However, officials of other two private carriers expressed satisfaction on their first day operation as they were able to maintain on average 70 to 80 percent passengers after keeping 30 percent of seats vacant for maintaining social distance as per health guideline prescribed by Civil Aviation Authority, Bangladesh (CAAB).

“Though we had to cancel two evening flights to Chattogram, we received satisfactory numbers of passengers in our eight flights,” said Kamrul Islam, General Manager of US-Bangla Airlines that operated four fights to Chattogram, three to Syedpur and one to Sylhet on the first day.

He said they received almost 100 percent passengers on Syedpur, 90 percent on Sylhet and 60 percent on Chattogram routes respectively after leaving 30 percent of seats vacant at the aircraft.

Beginning with its first post-shutdown flight to Syedpur at 7:15 am, Novoair operated three flights to each in Dhaka-Chattogram-Dhaka and Dhaka-Syedpur-Dhaka routes and one flight on Dhaka-Sylhet-Dhaka sector.

“We have received on average 65 percent passengers today for every flight after leaving 30 percent seats empty at our 72-seater ATR aircraft,” said the airlines Senior Manager, Marketing and Sales AKM Mahfuzul Alam.

In the evening in a video message to media, CAAB Chairman Air Vice Marshal Md Mofidur Rahman thanked all passengers and airlines to follow the health guidelines, including the social distancing instructions, issued by his office, properly to operate the domestic flights.

He said CAAB inspectors were deployed at the airports to monitor whether the airlines and airline staffs are following the health guideline or not.

“We were able to resume the flight operation today as the airlines authorizes, airport staffs and passengers followed the health guideline properly,” he said.

According to CAAB the guideline, all airlines have to keep at least 30 percent seats vacant on each flight to ensure social distancing by keeping at least a gap of a seat between two passengers if they are not from the same family.

On Thursday, the government decided to resume domestic flight operations on a limited scale initially on Dhaka- Chattogram, Dhaka-Sylhet and Dhaka-Syedpur routes from June 1 while the ongoing international flight suspension will be enforced till June 15.