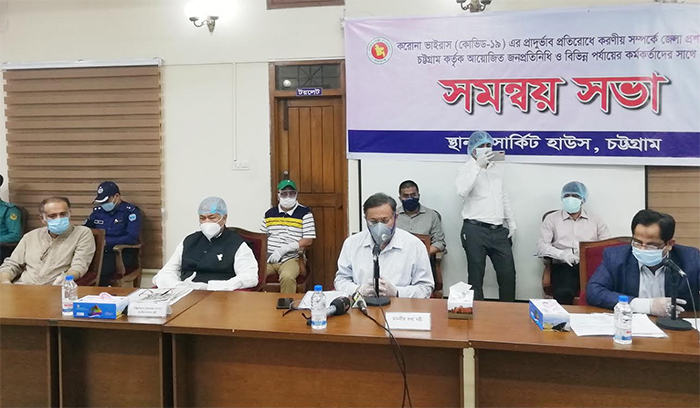 Urging people to stay home as long as possible, he said the nations across the world are fighting against an invisible virus.

“My protection depends on myself. It is difficult to protect another person by force if he does not realize it,” he added.

He said the number of coronavirus patients has already increased in the country as people have moved out of the house unnecessarily.

“Everyone has to think that we are living in a developing country, we have to protect both life and livelihood ourselves,” he added.

He said that lockdown has been relaxed in many places in the developed countries of the world where hundreds of people are still dying every day. It is not possible to force anyone to take his protection if he does not do it, he added.

The information minister was briefing the journalists at the local Circuit House this afternoon after presiding over a meeting on the coordination of relief and other issues to tackle the situation triggered by COVID-19.

Dr. Hasan Mahmud said no country in the world has been free from coronavirus and many developed nations in the world are in a state of disaster due to the coronavirus where too many people are dying.

In the United States, where health care and economic systems and management are much better than ours, there six percent of diagnosed patients are dying, he said.

“This is a global catastrophe, we want to deal with this situation with the cooperation of all,” he said.

He said Bangabandhu’s daughter Prime Minister Sheikh Hasina is monitoring the whole coronavirus situation round the clock and for this reason the health system in Bangladesh has not collapsed like in many other countries.

“Health management in Pakistan has also collapsed. Doctors had to be arrested there to keep the hospital running. Such a situation has not emerged in Bangladesh,” he added.

Thanking and congratulating doctors in the country who have been giving the services bravely to the coronavirus victims in this situation, the information minister said, many criticized the government unnecessarily

Dr. Hasan Mahmud said although many people did not convey thanks for the management of COVID-19, the world community congratulated the Prime Minister.

Many organizations, including World Health Organization and World Economic Forum, have congratulated the Prime Minister Sheikh Hasina, he added. “Even the United States has recently praised the Prime Minister’s corona management and efficiency. We are working under her direction, she is also aware of today’s meeting,” the minister added.

He said the Prime Minister is dealing with the situation to protect human health and save lives, at the same time in a developing country of 17 crore of people like Bangladesh, all activities across the country have been shut down for more than two months.

“The food assistance is being provided (to the poor) for two months. About seven crore people in the country have come under the assistance of the government in various ways,” he added.

For this reason, Bangabandhu’s daughter Prime Minister Sheikh Hasina deserved the thanks, he said.

Congratulating the journalists, the information minister said they are working in adversity in the face of the coronavirus. Already more than 150 journalists have been infected with the virus, killing more than three of them, he added.

Hasan prayed for early recovery of the infected people, including journalists. He also prayed for eternal peace of the departed souls of those who died of COVID-19.