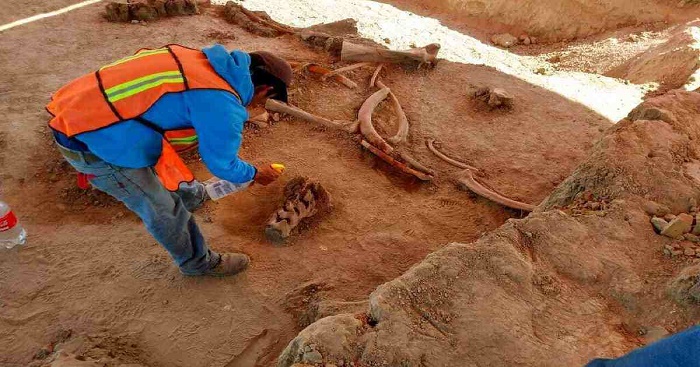 The bones of about 60 mammoths were found at an under-construction airport north of Mexico City, reports AP.

Archaeologists say the discovery was made near the human-built 'traps' where more than a dozen mammoths were found last year. This could possibly indicate that humans may have been smarter — and mammoths clumsier — than people had previously thought.

"There are too many, there are hundreds," said archaeologist Pedro Sánchez Nava, of the National Institute of Anthropology and History.

The institute began digging in three large but shallow areas in October, when work started to convert an old military airbase into a civilian airport. In about six months, the bones of 60 mammoths were found, and Sánchez said that the pace — about 10 mammoths a month — may continue.

The airport project is scheduled for completion in 2022, at which the dig will end.

The excavations were conducted on the shores of an ancient lake, once known as Xaltocan and now disappeared. The shallow lake apparently produced generous quantities of grasses and reeds, which attracted mammoths who often ate 150kg of the stuff every day.

"It was like paradise for them," Sánchez Nava said.

But the new excavations at the airbase have not yet turned up any of the distinct cut marks that would suggest human butchering of the animals.

Sánchez said the most recently discovered mammoths had apparently got stuck in the mud of the ancient lake and died, or were eaten by other animals.

But the bones will be subject to further study because Sánchez said humans might have carved up the mammoths once they got stuck.

And, he said, ancient human could possibly have used the mud pools and flats around the lake shore as a sort of natural trap. "It's possible they may have chased them into the mud," he noted, adding, "They (ancient humans) had a very structured and organised division of labour" for getting mammoth meat.

The discovery also challenges the notion that mammoth was a chance, sporadic item on our ancestors’ menu.

Sánchez Nava said the large numbers of remains will allow scientists to research how mammoths fed and whether they were already suffering genetic inbreeding or decline, which could have contributed — along with human hunting — to their extinction on the mainland about 10,000 years ago.