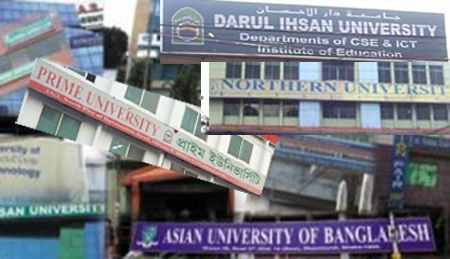 The University Grants Commission (UGC) alerted admission seekers to the risks of admission to the 27 private universities including the aforesaid ten universities.

UGC sources said IBAIS University is running illegal campus as it has no approved address at present and a case filed over the dispute regarding the Board of Trustees of the university is now pending.

UGC in a notice on March 22 alerted students to the risks of admission to 17 other private universities outlining the current state of the universities.

Of the 17 universities, operation of America Bangladesh University was stopped by the government but it now operating through taking a stay order from the High Court.

Southern University of Bangladesh is also running by the stay order of the court and a case is also pending over the dispute of the Board of Trustees (BoT) of the university.

There is also a dispute among the members of BoT at Sylhet International University. The Education Ministry sent letter declaring Shamim Ahmed as the legal authority of the university. But another group filed a case challenging the ministry’s letter which is now pending.

There is also dispute over the BoT of the Britannia University established in 2003 in Cumilla.

Besides, The University of Comilla established in 1995 was closed by the government on October 22, 2016, but the varsity authorities got a court verdict in its favour on December 15, 2016. Later on February 7, 2018, the education ministry allowed it to carry on its activities and formed a committee to visit the university to know its facilities necessary for running academic activities.

Meanwhile, the government earlier banned all the activities of Darul Ihsan University following a court order and the activity of the university is now remaining closed.

UGC Director (Private University) Dr Md Fakhrul Islam said “Neither the education ministry nor the UGC will take responsibilities if any student gets admission to any unapproved private university or unapproved campus, programme or course.”

He suggested the students to enrol only at approved campus, programme or course of the private universities.

“UGC has not permitted any foreign university to set up branch, campus or study centre in Bangladesh,” the official also said, warning the students against admission to such entities.