Deeply Enmeshed in the Language Movement 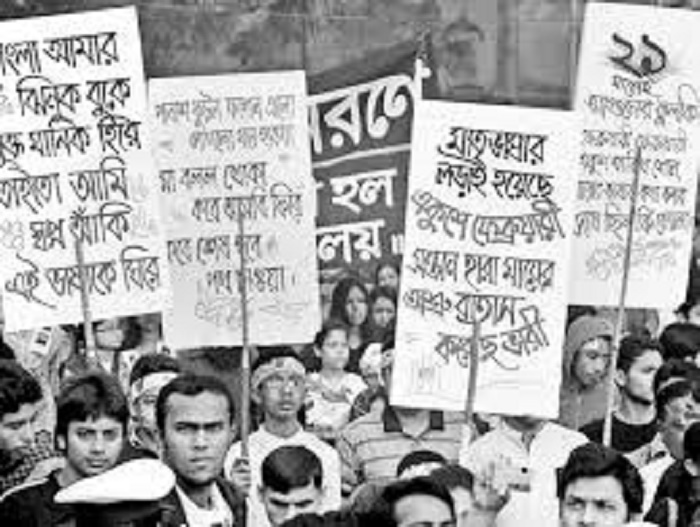 We previously discussed how the language movement started in Dhaka University following the creation of Pakistan, and how emerging political leader Sheikh Mujib played a pioneering role with his co-leaders. Sheikh Mujib was put to jail along with others on 11 March 1948, which created a stir in the student community. Mujib was soon released and presided over a larger protest meeting in Dhaka University campus, and also led the movement with broader support of the students and other cultural activists. Invariably, he had to spend a lot more time in jail from 1948 to 1952 for defying the oppressive regime.

Mujib promised to the legendary folklore singer Abbasuddin that he would do his best to make Bengali a state language. Sheikh Mujib was an aesthetic leader and knew how to appreciate art and culture. This artistry is reflected in the words he penned in his memoirs about the quality of Abbasuddin’s songs, which he heard while returning by boat from the village to catch the train at Ashuganj railway station. In his own words, “I would consider a part of my life incomplete if I hadn’t had the occasion that day to hear Mr. Abbasuddin sing bhatiali songs as we crossed the river. When he was singing these songs as we crossed the river that day, it seemed to me that the gently lapping waves were entranced by his singing." (The Unfinished Memoirs”, 2019 pp. 118-19). And then he confessed that he was already devotee of this great singer. Mr. Abbasuddin reminded Mujib about the need for a stronger movement to uphold the honor of Bengali language, and so he just took another fresh vow. Again in his own words, “He told me at one point, ‘Mujib, there is a conspiracy afoot against the Bengali language. If Bengali isn’t made a state language, Bengal’s culture and civilization will be under threat. The songs that you have appreciated so much today will lose all their charm and melody. Whatever happens, Bengali must be made the state language.’ I pledged to him that I would try to make it our state language and have done my best to achieve this goal.”(‘The Unfinished Memoirs’, ibid. p.119).

That he kept his words has also been validated by the Intelligence Branch’s Special Report on him dated 10th December 1949. The 19 point report included how Sheikh Mujib caught the attention of the Intelligence Branch as soon as the partition took place. It explained everything starting from his role in the Dawal movement to his demands for the abolishment of the Zamindari system, food and clothes for the people, and his role in the language movement. An arrest warrant was issued against Sheikh Mujib on 30thDecember, 1949 based on this report. On 31st December he was arrested from a house in Lalbagh of Old Dhaka (SECRET DOCUMENTS OF INTELLINGENCE BRANCH ON FATHER OF THE NATION BANGABANDHU SHEIKH MUJIBUR RAHMAN Edited by Sheikh Hasina, Hakkani publishers, Volume-1, page-326).He was in jail for more than two years afterwards.

The report prepared on 17thJanuary, 1950 said that Sheikh Mujib was arrested for six months under the Public Security Act. The report also branded him the ‘most dangerous man’ in the East Bengal Muslim Student’s League, who yielded enough power to create problem for the state at any given moment (ibid, page-354).

Maulana Bhasani and Shamsul Huq visited him at the jail gate on 18th January and assured him that they would get him freed soon. However, Sheikh Mujib ended up spending more than 2 years in jail in that spell of political imprisonment. Even in jail Mujib did not refrain from giving political statements. On 26thNovember, 1950 he was transferred to Gopalganj sub-jail in the name of his trials so that political leaders of Dhaka were unable to meet him. He was transferred again to Faridpur jail. And thus he used to be transferred from one jail to the other in the name of trials just to create a plea for postponing his release. All this hassle had a serious impact on his health and he consequently fell ill (‘The Secret Documents’, Volume-2, page-4).

The report prepared on 26thFebruary, 1951 said, “His attitude was very stiff”. Sheikh Mujib was residing in Khulna jail during this time. While making a statement he had brought up the struggle he went through to bring about Pakistan. And now he was willing to sacrifice his life to bring smiles to the faces of people of Pakistan. He would rather die than sign a bond for his release (ibid,Volume-2, page-13).

There was an order on 7thMarch, 1951 that Mujib would be transferred from Khulna to Barisal jail. The report of 8thMarch, 1951 said that he would be arrested again under the Public Security Act as he had refused to sign the bond. On 14th March the provincial court of Gopalganj granted him bail. Around 200 students began a procession with slogans such as “Pakistan Zindabaad” and “Sheikh Mujib Zindabaad”. Mujib then gave a speech asking these students to stand against the corrupt government. He was arrested again on the same day in the evening from in front of his own house. The following day there was strike in Gopalganj demanding of his release (ibid, Volume-2, page-30 and 31). His memoir also testifies this.

By August 1951, Mujib’s health deteriorated. He was sent to Dhaka Central Jail for treatment on 29th August. He wrote a small letter to the editor of “Ittefaq” newspaper, Tofajjel Hossain Manik Mia, regarding his health. This letter shows us that even though he was suffering in prison and mortally ill, he would still not accept any injustice. The letter read like this:

Take my Salam. I think you all have become a little impatient for me. Do not worry. I am admitted in the jail hospital. They are trying a lot for my treatment. I may have to spend some more days in the hospital since my health has not yet improved.

…you will be happy to know, I have quit smoking. Because how much longer will I waste my father’s money. And my health is also not well because suddenly, after coming to Dhaka jail, I have spotted blood in my spit for three days. This may be due to the cold I caught.However, it is better to be careful. There’s no information about how much longer I have to stay here. I have asked for an X-ray but the government always takes time to do these things. It is uncertain when I will get my X-ray but I am trying to get it as soon as possible. The Super of Dhaka Jail is a very good doctor so I hope to get well soon. There is no reason to worry. Even if I were to die in prison, I would still not bow down to these lies…

After around six months of Sheikh Mujib’s transfer to Dhaka Central Jail in late 1951, the incidents of the language movement on February 21, 1952 took place. Earlier he was also taken to the Dhaka Medical College hospital as the Jail hospital could not treat him properly. He was given a cabin as well. He met most of the student leaders from different groups and parties in the late evening while in the hospital to chalk out a province-wise political program of observing 21st February as State Language Day with a convener from the Students’ League. He also decided to go on a hunger-strike from 16th February onwards. Soon he was taken back to the central jail even though his health didn’t improve much. After failing to dissuade him from the decision of the hunger strike, he and his fellow protesterMohiuddin were transferred to Faridpur jail on 15th February. Both them started a hungerstrike in Faridpur jail on 16th February as proposed, hoping that there would be an outburst of mass anger on 21stFebruary. The Secret Document Report of 20th February stated that leaflets about the hunger strike of Sheikh Mujib and Mohiuddin were distributed in different places of Dhaka on 19th February. The news about Sheikh Mujib’s hunger strike added more fuel to the language movement.

On 21stFebruary, 1952 the police opened fire on the students protesting for Bengali as a state language. Salam, Barkat, Rafiq, Jabbar and many other unknown students were martyred on that day. Sheikh Mujib and Mohiuddin’s health on the other hand, deteriorated further during their hunger strike for which they were admitted to the jail hospital. From the ‘Unfinished Memoirs’, we get to know that when Sheikh Mujib learned about what happened to the protesting students, he was extremely saddened even though he himself was in very poor health at that time.

In his own words, “…Later that night I became really worried when I heard what had happened in Dhaka. It was difficult to tell how many people had actually died in the city. However, we knew that many people had been shot to death. The two of us were lying in adjacent beds. The physician had asked us not to move at all but such was our excitement that we were up soon. Two prisoners had been assigned to watch over us and to attend our needs. They put us back to the bed immediately. I was feeling very upset and seemed to have lost all capacity for thought. Why had they resorted to shooting the demonstrators? They were observing a strike and were in a procession, intending to hold a meeting but not to disrupt the law and order situation. Surely no one had any intention of becoming violent. The imposition of section 144 always leads to violence and an administrationis much better off without imposing it.

Very late that night a guard told me that many students had died and many more had been detained. That was all that we found out about the day’s happening that night. As it is we were having a tough time going to sleep and now that we knew what had happened sleep proved impossible…”(‘ The Unfinished Memoirs’, ibid.p.202)

The Secret Reports numbering 78, 79, 80 and 81 of the Intelligence Branch let us know that the government was getting strict warnings from the agitating students and the masses about releasing them. Leaflets demanding their freedom were distributed in many places of the country including Dhaka.  However, it was not before 27th February evening that they were officially released from jail. The next day, Sheikh Mujib was taken out of the prison on stature in the presence of his father. It took another five days for him to reach his home and meet family members as he was very frail following the hunger-strike. This tells in brief how deeply he was enmeshed in our historic Language Movement.

The writer is Bangabandhu Chair Professor, Dhaka University and former Governor, Bangladesh Bank. He can be reached at [email protected]