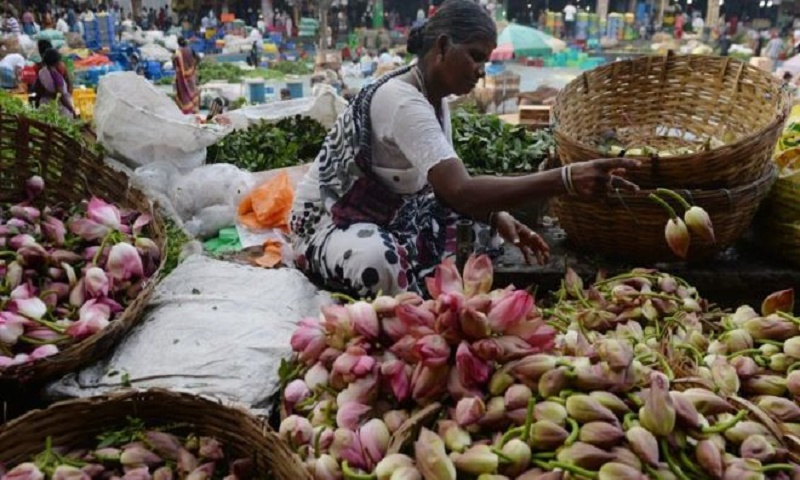 Thousands of vendors sell flowers, fruits and vegetables at the Koyambedu market daily

On 5 May, Bharath Gupta, a district collector in southern India, learnt that the sprawling Koyambedu market in Chennai city was being temporarily closed.

The reason: several vendors and labourers at the market had tested positive for coronavirus, and were being linked to a spate of cases in Chennai and surrounding areas.

Mr Gupta knew of the market because every day, farmers from his district - Chittoor in Andhra Pradesh state - send trucks packed with tomatoes to Koyambedu, which is in the neighbouring state of Tamil Nadu.

But what alarmed him was that the trucks are driven by locals, often accompanied by a helper or cleaner who loads and unloads the cargo, and sometimes a cashier, who collects money from the sale on behalf of farmers. They leave every night around 19:00, and return to Chittoor the following afternoon.

On 6 May, officials in Chittoor began testing all of those who had been to the market since 20 April. Other districts in Andhra Pradesh, which also supplied to Koyambedu, followed suit.

As of Wednesday, Chittoor had reported 43 new infections which could be traced back to Koyambedu. Meanwhile, across Tamil Nadu as a whole, more than 2,000 new infections - a little over a third of the state's active cases - have been linked to the market.

India, which has nearly 50,000 active cases, is nearing two months of a countrywide lockdown. But in all that time, grocery stores and food markets have been allowed to stay open, classed as essential services.

But now one of those markets is the source of India's biggest active cluster, with a far-reaching trail that is as tangled as the country's food supply chain. Unsurprisingly, it has sparked a public row over who is to blame, but it has also revealed the challenge of regulating India's bustling, crowded food markets, where space is a luxury and social distancing a fantasy.

Spread over 65 acres in the heart of Chennai, the Koyambedu market is one of the largest in Asia. Wholesale and retail shops selling grains, fruits, vegetables and flowers draw tens of thousands of buyers every day. Add to that the shop owners, truck drivers and daily-wage labourers and it amounts to around a hundred thousand people, on average.

"We have taken enough precautions, but when a pandemic spreads, it's bound to spread everywhere in the city," says D Karthikeyan, a senior official in the Chennai city corporation.

The evidence of their efforts, he adds, is in the fact that the first Covid-19 case from the market was detected on 24 April, one month after the lockdown began.

It was a 54-year-old vegetable vendor who lived in Pulianthope, a densely-populated neighbourhood that has emerged as a hotspot in Chennai.

Mr Karthikeyan says it's unclear if she contracted the virus from the market or passed it on to people there. "It's like a chicken and egg story. Which came first?"

So began another round of contact-tracing and testing. It led to truck drivers, daily-wage earners who load and unload the cargo, fruit, vegetable and flower vendors from across Chennai and Tamil Nadu, who travel to the market to buy produce that they take back and sell, and often the people they travel with in auto rickshaws or buses.

And they, in turn, led officials to their families and others they came in contact with back home.

In the last three weeks since the first infection linked to Koyambedu was detected, the cases have begun to add up.

In that time, Chengalpattu and Thiruvallur, two districts which border Chennai, added hundreds of new cases, taking each of their tallies from less than 60 to more than 400. In Cuddalore district, more than 200km away, 114 people who worked at the Koyambedu market tested positive on a single day. Eighty percent of the 348 positive cases in another district, Ariyalur, have been traced to the market - many of them daily-wage workers. In Andhra Pradesh, 28 people across seven districts who had visited the market tested positive on Friday.

On 8 May, Tamil Nadu officials said 1,589 positive cases in the state could be traced to the market. The next day that number had jumped to 1,867, but there has been no update since then.

But with 9,674 positive cases so far, Tamil Nadu is now among the worst-hit states in the country, second only to Maharashtra with 27,524.

The question that seems to be on everyone's mind is: why didn't they close the market?

Who is to blame?

Closing the market, Mr Kartikeyan explains, would have affected the livelihoods of so many farmers.

"It's the sole [food] supply link to Chennai and its suburbs - 5,000 tonnes of fruits and vegetables are traded daily and 400 trucks of vegetables alone arrive every day," says Mr Kartikeyan.

So despite the obvious risks, it stayed open.

He says they also made several attempts to limit crowding, even offering to relocate many of the shops to other parts of the city, but the traders refused.

During that time, Tamil Nadu announced a complete, more stringent lockdown for three days at the end of April, and people were seen thronging markets to stock up.

Vendors at Koyambedu told BBC Tamil that thousands came to the market on 25 April and that "there was no space to move".

On 28 April, the government shut down retail shops, and moved the fruit and flower market elsewhere in the city. Only wholesale shops were allowed to operate, but again, on 30 April, at the end of the three day lockdown, the market saw a huge crowd.

As the cases continued to go up, Mr Kartikeyan says, they decided to close the market "forcefully" even though traders were unhappy with the decision.

They have since been allotted shops at another market but they have been demanding that the Koyambedu market be reopened since the new market can only accommodate a few hundred shops.

"It was a mistake to let the market function during the last 40 days of lockdown," says GD Rajasekar, head of the Koyambedu vegetable sellers' associations, told the BBC. He said they had made several suggestions, but officials had refused to listen to them.

The state's chief minister has, however, blamed the traders, accusing them of not following the rules to curb the spread of the virus.

But traders say these large, semi-formal markets in cities where land is scarce and costly are not designed for social distancing.

"Social distancing cannot be adopted in these markets," says Raj Kumar Bhatia, secretary of the merchants association for the Azadpur market in India's capital, Delhi.

It's Asia's largest fruit and vegetable market, trading in millions of tonnes of fresh produce daily, but it's quickly becoming a source of worry - 31 people from the market have tested positive so far. And news reports have begun to link a rise in cases in neighbouring Haryana state to the market.

Azadpur also hosts auctions every day, from six in the morning to noon to set the price of produce - all of which is a risk with Covid-19.

"We need people to bid and we need them to gather," says Mr Bhatia. But he says the fear of the virus is already keeping many traders and suppliers away - although there are 28,000 shops, goods are arriving for only 1,000 of them.

With supplies already dropping, shutting the market in Azadpur would be as unpopular a decision as shutting the one in Koyambedu.