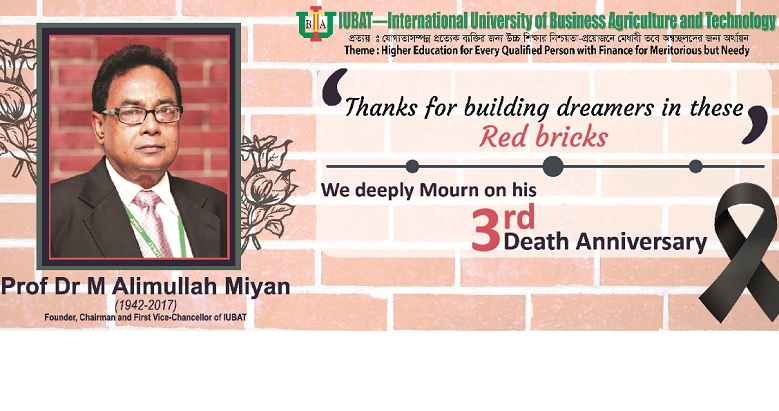 Tomorrow (Sunday, May 10) is the 3rd death anniversary of the Pioneer of Non-government University in Bangladesh and founder VC of IUBAT Prof Dr M Alimullah Miyan.

Prof Dr M Alimullah Miyan was born on 15 February 1942 at Kailine village under Chandina Upazilla in Comilla District. He completed his BCom (Hons) in 1962; MCom in 1963 from Dhaka University. He received his MBA from Indiana University, USA in 1968 and PhD at Manchester Business School, UK in 1976.

Dr Miyan’s distinguished and varied academic career has included the positions of Director and Professor at Dhaka University’s Institute of Business Administration, and Founder Chairman of the Centre for Population Management and Research (CPMR), also at Dhaka University. Dr Miyan served as President of IUBAT upon its founding in 1991 before moving into his role of Vice-Chancellor in 1994. In 1963-64 he served as a Research Associate, Social Science Research Committee, and Dhaka University. He was the Vice-Chancellor of IUBAT—International University of Business Agriculture and Technology and Professor, College of Business Administration (CBA) from April 1994 to 2017.