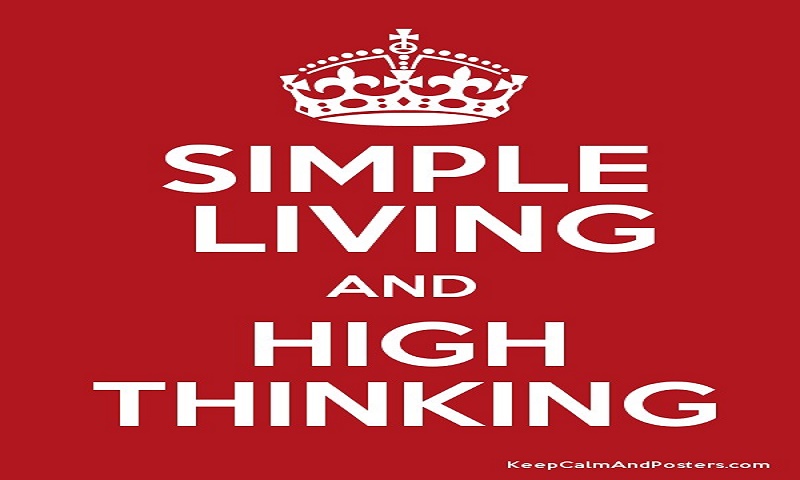 The title of this article is taken from a poem written more than two centuries ago. “Rapine, avarice, expense, this is idolatry; and these we adore. Plain living and high thinking are no more. The homely of the good old cause is gone; our peace, our fearful innocence, and pure religion breathing household laws.” These are the last lines from the poem written by the English Romantic poet, William Wordsworth in September, 1802 in London. The idea conveyed in the title is adopted as a dictum of philosophy by many groups and people for their life. The situation was soon after the Industrial Revolution in Europe. Inventions have given speed to life, but it robbed life of its pristine beauty and sanctity of living in harmony of living with nature. Man has to live in harmony with nature and other members of the human family for sustainable future.

Man has far removed from the nature. He is abused nature and its resources to the point when nature cannot but take revenge against man. We alienate ourselves from our mother-nature. We have looked at it too objectively. Diversity in exterior, but inherently all created order is united. All that exists must co-exist for meaning and fulfilment, or disaster inevitable.

Solomon the wise prophet-monarch in the Old Testament observed, “This only have I found: God made mankind upright, but men have gone in search of many schemes” (Ecclesiastes 7:28). Man needs to think high first to be able to live plain and simple. Today we need more and more to internalise the principle ‘Live simply that others may simply life’. Human society has always been afflicted by the gap between the haves and the have-nots. Grave disparity between wealth and poverty is to be found not only between nations, but also with many nations as well.

We face the colossal problems in all areas of life: material, economic, politics and all. In the global scenario there are the terrifying build-up of nuclear weapons, the reckless violations of human rights, the ecological crisis, lamentable disparities between countries in matters of riches and opportunities to share them. Ecological crisis is universal. Entire creation is under a threat. The materially affluent and dominant Western and Northern ecology has proved to be unreliable in getting any solution for crisis. Poverty has come to be known as an environmental problem in many countries. The main culprit of our environmental crisis is the dominant model of modern development paradigm that relies on the myth of progress and cosmetic growth. There are adverse effects on all that sustain life: water, air, land and forests and vegetation. The ever-expanding human population is feared to face a bleak future as a result of the global warming and greenhouse effect and carbon emissions. We need to accept the harsh reality that planet earth has too many people now. We have awfully failed to be faithful stewards and users of all resources of the world. The said myth satisfies the gods of material prosperity and mass production. This is idolatry at whose altar we sacrifice the harmony between man and nature, man and community and the mutual sustenance among them all. The entire creation is groaning today for salvage from the unrestrained abuse of mankind in the name of so-called progress, development and civilisation.

From the social perspective, there are the regrettable state of unemployment, conflict in industrial relations, unjust competitions and racial and sectarian unrest and even violence. Spiritually, we see that there is a widespread materialism and consumerism among the affluent lacking any love and regard for transcendental truth. In such a situation we have enough reason to predict that the world is heading towards a disaster. Who can show us any light in this calamitous darkness prevailing over the human family? People feel confused, bewildered, alienated. We need leaders who are with vision, clear-sighted, courageous and dedicated.  True leaders speak out of moral outrage against evils. George Bernard Shaw observed, ‘You see things as they are and ask ‘Why?” but I dread things that never were, and ask “why not?” Our world today needs both globally and nationally leaders, who will be galvanised with clear vision for a sustainable future for human society and civilisation. People perish without vision. An authentic vision helps leaders to see the difference between how things are now and how they should and could be. This insight or foresight empower and encourage us to decry the wrongs. And also can make one to feel the call of active dedication for motivating millions to achieve the goal of lasting justice and peace for all. We in Bangladesh are proud of our Prime Minister Sheikh Hasina. She has the qualities of a great leader. Her simple life-style, genuine love, sensitivity and commitment for the good of people have been unparalleled. She has already earned the ‘the Mother of Humanity’.

The Universal Declaration of Human Rights is based on the notion of universal human dignity. This has to enshrine and protect the common moral values and sanctity of all human life. Now we have a sure challenge to face as to how far we have respected this. Many global and international bodies today have many charters, protocols and treaties for the promotion of justice and peace in the world. But many of them are rendered ineffective. This is primarily because of the lack of putting them into practice. Surely, for our present world the adage ‘The pen is mightier than the sword’ does not convey meaning. Wisdom, love, honesty, self-control, concern for others, simplicity are replaced by ‘might is right’. The activities and selfish interests of many developed countries lie behind many of the problems that humanity suffers. We long for a world where worldly affluence will not influence our lives.

The entire humanity has been suffering from an unprecedented attack of the hydra-headed monster named Corona virus. The whole world has been awfully terrified by the plague that it has caused. Millions have been suffering from this, thousands have died and are dying every day, and millions lost their source of income and as such are suffering from hunger and malnutrition. In the midst of all these we have been surprised at the recent decision and announcement of the President of the United States of America to put a ban on giving his country’s usual financial support for World Health Organisation. This decision has been heavily criticised by people all over. The anxiety and fear continue to loom large because no preventive or curative has so far been invented; and that nobody knows when this pandemic comes to an end. Neither do we know of the genesis of this, for sure. We continue to learn. We need to learn that we cannot ignore the unity and integrity of creation.

The writer is a theology teacher and a social worker.