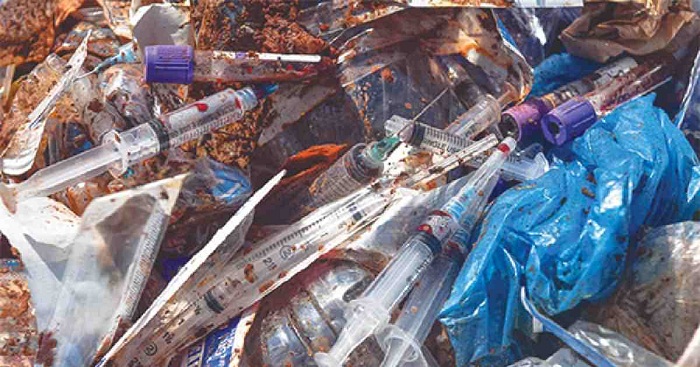 The ongoing COVID-19 pandemic has already turned healthy places around the world into living hells with massive death tolls because of its fastest-spreading nature, and continuously resulting lockdowns in almost every part of the world.

Amid all the problems so far it created, one significant problem can create major havoc in this already devastating and contagious atmosphere in a densely populated city like Dhaka - handling medical waste.

A few days ago, Tongi police station (East) explored a disgusting case scenario - a man named Nasir was convicted on charges of recycling used masks and hand gloves that had been collected from hospitals in Tongi, Uttara and Gazipur.

Amid huge demand for surgical masks and gloves in the market during this crisis period, Nasir collected those from the dumping grounds of hospitals and washed bloodstains with shampoo. Locals explored his secret business when he sent those masks and gloves into a local laundry for the final ironing, thus police discovered this heinous act.

This type of reprehensible act is easy to commit by the immoral and evil-minded people when hospitals become careless and dump their medical wastages without proper safety measures. The masks and gloves are two of the examples of thousands of tonnes medical waste that are poorly disposed of after being used.

China’s Wuhan, the first of the cities that got viciously brutalized by the pandemic, is the home to 11 million people. Its hospitals produced more than 240 tonnes of medical waste daily during the peak of the outbreak compared with 40 tonnes before the epidemic occurred, according to China’s Ministry of Ecology and Environment’s emergency office.

To fight this enormous amount of medical wastages, the central government deployed 46 mobile medical waste treatments facilitates to the city of Wuhan and built a new plant with a capacity of 30 tonnes within 15 days in March.

In India, the Central Pollution Control Board (CPCB) has recently released specific guidelines for handling and safe disposal of biomedical waste generated during the diagnosis, treatment and quarantine period of patients confirmed or suspected to have the Covid-19. Though the country already had Bio-Medical Waste Management Rules (formed in 2016), the new CPCB guidelines were released to ensure that the waste generated specifically during testing of people and treatment of COVID-19 patients is disposed of in a scientific manner.

Although Bangladesh has not been yet victimized by COVID-19 in terms of the death count compared to Wuhan in China, New York in the United States or the whole population of European countries like Italy, Spain and France - the medical waste management has always been an issue to think about.

According to the Medical Waste (Management and Processing) Rules 2008, "medical wastes could not be mixed with other wastes at any stage -- while producing inside hospitals, while collecting from hospitals, while transporting, and would be processed separately based on classification".

Experts say medical wastages are not like other wastes such as the household or industrial wastages. It can infect one directly through the skin or by ingestion and inhalation with objects like inhalers or ventilating pipes. Many contagious viruses including HIV and Hepatitis (B and C) can easily be generated from such wastes and can harm the ones who do not have the diseases. Germs and viruses, which are antibiotic-resistant (such as the COVID-19 at this point) can easily spread from medical waste.

"Most of the times we observe public health catastrophes such as cholera, typhoid, pneumonia etc. or even sexual diseases like HIV - and we blame the polluted environment and human nature and behaviour. Well, it’s not always the water or air, but can be sourced from medical wastes too," Prof Dr Md Abdul Mannan, a Fellow of WHO on HIV AIDS (Bangkok) and Head of the Department, Dermatology and Venereology at Cumilla Medical College Hospital told UNB.

The rules, as can be seen, contain no specific mention about the wastages that are produced from the COVID-19 affected patients in home quarantine. Although the humongous and increasing numbers of COVID-19 affected patients were unimaginable at the time when the rules were first finalized, the current situation certainly demands new guidelines as it can create larger havocs in Bangladesh, one of the most densely-populated countries in the world.

If the massive amount of medical wastages cannot be managed through maintaining proper and adequate guidelines, chances of community-based spreading of COVID-19 can exceed the limit and take more lives in the upcoming days.